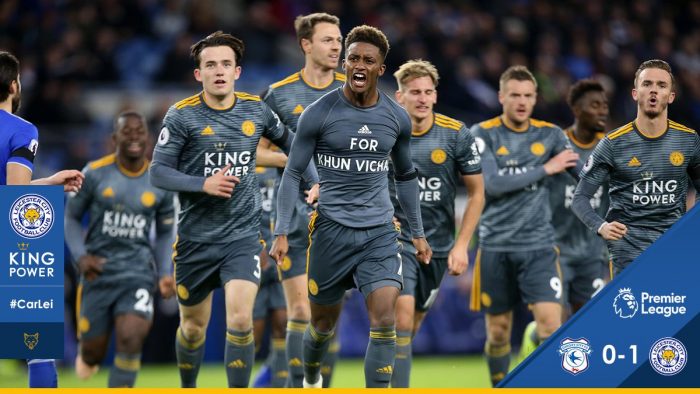 Leicester City played with great will and nerve to beat Cardiff City on an emotive day as the Foxes returned to action for the first time since the death of their owner in a helicopter crash.

On an afternoon when football seemed both an irrelevance and a form of release for Leicester’s grieving players and fans, the two clubs united to remember Vichai Srivaddhanaprabha and the other four people who lost their lives on 27 October.

Leicester’s players were visibly moved during a minute’s silence and, after the laying of wreaths before the match, there were further tributes including the unfurling of banners shared between the two sets of fans, who joined forces to create a stirring atmosphere of rare solidarity.

Once the match at Cardiff City Stadium was under way, it was contested as fiercely as any Premier League fixture with chances at both ends in a goalless but competitive first half.

Cardiff’s Victor Camarasa struck the crossbar with a free-kick and Jamie Vardy felt Leicester should have had a penalty when his shot appeared to hit Sol Bamba’s arm.

However, the Foxes were not to be denied and, after Demarai Gray’s scored with a low finish early in the second half, there was a huge outpouring of emotion as the entire team celebrated together before running over to their travelling supporters.

BBC reports that after scoring, Gray removed his jersey to reveal an undershirt on which the words ‘For Khun Vichai’ were emblazoned as a tribute to Srivaddhanaprabha, whose name the Leicester fans continued to sing for the rest of a highly charged and poignant afternoon.

After the final whistle, the Leicester players and backroom team stood and applauded with their fans long after the game had ended.

The Foxes move up to 10th in the table while Cardiff drop into the relegation zone in 18th after Newcastle beat Watford 1-0.