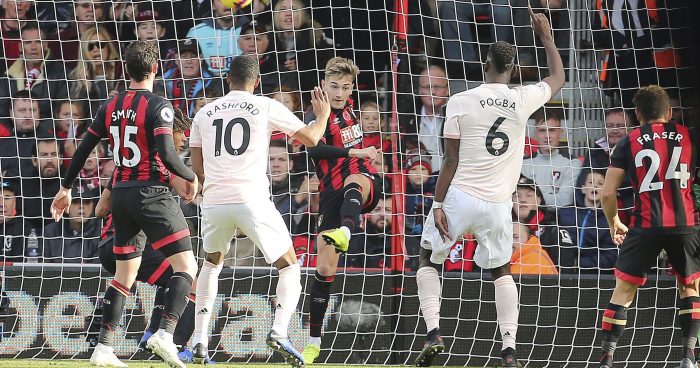 Substitute Marcus Rashford scored in stoppage time on Saturday for Manchester United to come from behind to beat Bournemouth 2-1 away.

The win helped Manchester United close the gap on the top four in an exciting English Premier League clash.

Callum Wilson had fired Bournemouth ahead in the 11th minute, but they were later kept on the back foot.

An in-form Anthony Martial netted his fifth goal in the last four games in the 35th minute, while Rashford completed the comeback from close range late on.

This had followed an inch-perfect low cross from the right by Junior Stanislas, after some excellent build-up play.

Martial levelled when he drilled in a powerful left-foot shot from 11 metres, after good work by Ashley Young and Alexis Sanchez.

The goal meant the Frenchman has scored in four successive top-flight games for the first time in his career.

With Manchester United’s Belgium striker Romelu Lukaku left out of the matchday squad, other forwards needed to justify their paycheck.

Martial stepped up to torment his markers in the second half as Manchester United piled on the pressure.

This was after Ander Herrera and Rashford came on for Juan Mata and Brazil midfielder Fred.

The visitors missed a string of chances after the break.

But just when it seemed Bournemouth would hang on, Rashford popped up in the six-yard box to chest down Paul Pogba’s cross and tuck the ball past goalkeeper Asmir Begovic.