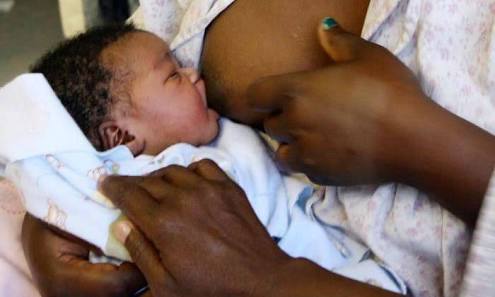 A Consultant Paediatrician, Prof. Emmanuel Ekanem, on Saturday decried the practice of throwing away the colostrum after the delivery of newborns, saying it contains antibodies to protect newborns against disease.

Ekanem of the Department of Paediatrics, University of Calabar Teaching Hospital (UCTH), Calabar, Cross Rivers, revealed in Lagos that it was a wrong practice some mothers still indulged in.

According to Wikipaedia, Colostrum is the first form of milk produced by the mammary glands of mammals immediately following delivery of the newborn.

“Most species will generate colostrum just prior to giving birth. Colostrum contains antibodies to protect the newborn against disease,” it said.

Ekanem said: “It is surprising that mothers still believe the milk they produce in the first four days of life is not good for their babies.

“It is a very rich milk which helps the child to grow; it has a natural method of also preventing children from diseases.

“Colostrum is exactly what babies need for the first few days to protect them against infection as well as help keep their bowels soft.

“It is very concentrated with very high levels of proteins.

“So, it is important that the baby takes that milk; any mother who throws the milk away should know that she will never have that quality again after the first four days.

“The child too may not have that quality again after the first four days; it changes, babies who take the milk will definitely do better even in school.

“So, that early milk is very important, mothers should stop throwing it away.

The paediatrician urged mothers to frequently and exclusively breastfeed their babies whenever they demanded for it.

He said that regular breastfeeding was beneficial for the mother as it would help increase the production of breast milk.

Ekanem said breastfeeding should not be at set intervals, but regularly throughout the day and as the baby demanded.

He cautioned mothers against early introduction of solid foods to their babies, saying exclusive breastfeeding should continue for four to six months.

Ekanem said: “The baby’s body is not developed enough to tolerate solid foods before the first four months of age; breast milk provides entirely all the baby needs until that age.’’

He warned mothers to stop applying family tradition on their children wellbeing.