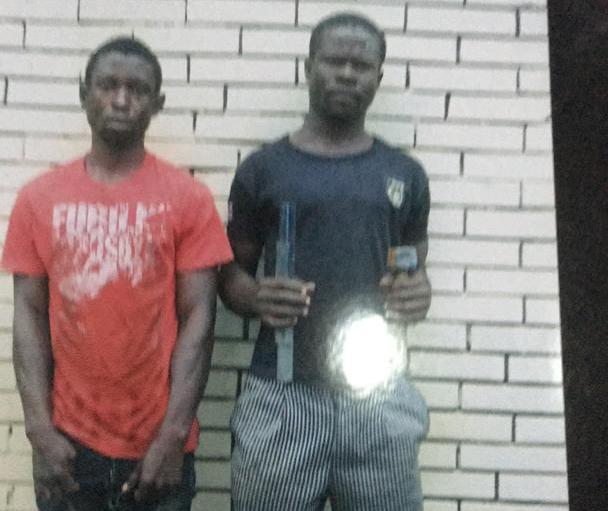 Motorists driving through Lekki/Epe expressway will now heave a sigh of relief as two notorious armed robbers who specialised in robbing commuters, Akpan Samuel and Ani Chukwuma, were remanded in Ikoyi prison after their arraignment at Igbosere Magistrate’s Court, Lagos State, South-West Nigeria.

The suspects were arrested on 29/10/2018, by operatives of the Command led by the Divisional Police Officer, Maroko Division, CSP Isah Abdulmajid.

During interrogation, the suspects revealed their modus operandi. They mount the pedestrian bridge, Maruwa bus stop, Lekki/Epe expressway. At that vantage position, they were able to monitor the traffic and carefully select their target.

They thereafter, swoop on the target and rob them of their valuables by means of a big hammer used in smashing side glasses and windscreens of drivers who refused to roll down their glasses when commanded to do so. The hammer and an improvised pistol that appears like a perfect prototype of a berratta pistol, were recovered from them.

Their activities were a source of concern to the Command thus the state Commissioner of Police, Imohimi Edgal, directed the DPO to mobilise all assets at his disposal to ensure the arrest and prosecution of the hoodlums.

The police boss assured that the activities of this set of criminals would soon be a thing of past as the Command has increased surveillance along all routes with heavy traffic.