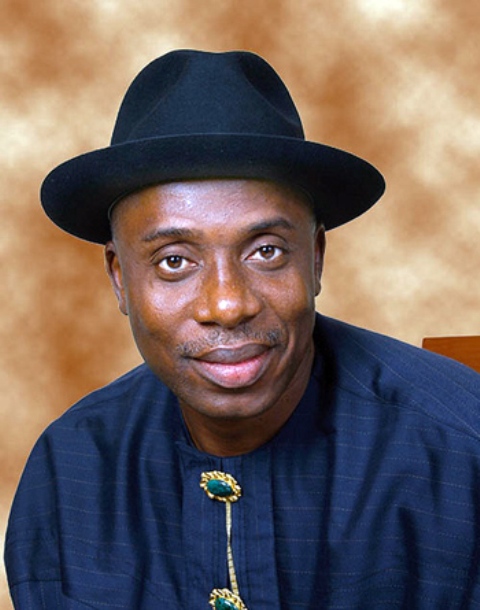 Former Governor of Rivers State and Minister of Transportation, Rotimi Amaechi on Sunday afternoon rescued a kidnapped victim along the Omoku/Egbeda road in Rivers State.

Amaechi was on his way to Ubimini Community of Emohua LGA to address APC supporters when he sighted a Lexus SUV abandoned in the bush.

Amaechi, who was leading his convoy consequently stopped  and ordered his security team to comb the forest in search of the occupants of the vehicle.

It was during the search that the security personnel in the minister’s convoy rescued one of the occupants of the abandoned Lexus SUV.

The victim turned out to be APC supporters attending the PVC sensitisation rally in Ubimini where the minister was to address party supporters.

Narrating his ordeal to Amaechi, the rescued victim, Edi Chinda Edi, said, they were on their way to Ubimini for the APC programme when the kidnappers barricaded the Express Way and attacked them.

He said, eight of them were in the Lexus SUV when the kidnappers armed with AK47 rifles and other dangerous weapons struck.

“We were eight in the car and they succeeded in kidnapping seven others .While they were beating and forcing us into the bush I managed to escape into the other side of the forest,” he explained.

Worried about the safety of other victims who were yet to be found, Amaechi directed some of his security personnel to continue the search and ensure that the remaining victims were rescued and their abductors arrested and prosecuted according to law.

Amaechi , had ceaselessly complained about the high level of insecurity in the state under the watch of his successor, Nyesom Wike.