No frosty relationship with NASS – Osinbajo 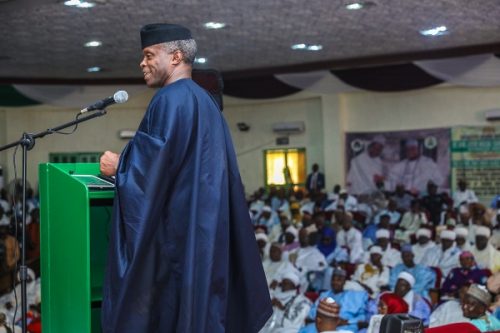 In spite of political differences, the presidency is happy with the good relationship with the National Assembly.

Unlike in the past, the present executive had never tried to step into the affairs of the conduct of the two houses.

Vice President Yemi Osinbajo spoke at the 2017/2018 Barewa Old Boys Association annual lecture in Sokoto where he restated that the relationship between the executive and the National Assembly remained in good condition.

“Moreover, Nigeria had five Senate Presidents between 1999 and 2007, which is very easy to forget. All of this and many more took place in very recent history.

“So, you will agree with me that a lot had changed at least with regard to political understanding,” Osibanjo added.

He said that the Federal Government had achieved a lot in all sectors of human development and democratic process.

“There is a lot of impunity that have been defined to public office in Nigeria in the past, especially grand corruption which had been sanctioned under the present administration.

“I said grand corruption because our society had a problem of extended corruption affecting all government institutions and today has never been the case.

“Nigeria had in the past faced so much challenges of corruption in public offices with a lot of government money being stolen by individuals which the present administration blocked such instances,” he said.

Osinbajo added that the present administration under leadership of President Muhammadu Buhari had recorded tremendous success in the areas of security, agriculture, judiciary, legislature, among others.

“There is not a single state in Nigeria that is not undergoing a measure of FG project under the ministry of power, works and Housing.

“More so, clearly we have not done all we want to see, but if we are to ask our brothers and sisters from the North-East of what Boko-Haram seize 14 local government in their state, you will agree with me that they have seen some change.

“If we are to ask the farmers enjoying the credit and support by the FG programmes and getting a more suitable supply of fertilizer, perhaps they may say that they have seen some change.

“The over 500,000 graduates which have been employed under N-power programme, which is direct government employment, have been training in various fields to be useful for themselves.

“Also traders who are getting direct credit from the government to support their small scale businesses, they may say that we have seen some change,” he said.

Earlier, the Emir of Gummi, Justice Lawal Gummi, presented a paper with a title “The challenges of Democracy to Judiciary: The Nigerian Perspectives.”

“We are yet to cultivate the right attitude that is needed to stabilise the process for our advance in democracy.

“The stunted growth that we are presently witnessing in our democracy is as a result of lack of discipline and non adherence to the basic tenets of democracy by our successive governments, over the years,” he said.

Gov. Aminu Tambuwal and the Sultan of Sokoto, Alhaji Sa’ad Abubakar, commended the vice president for attending the event and the organizers for the choice of the state.