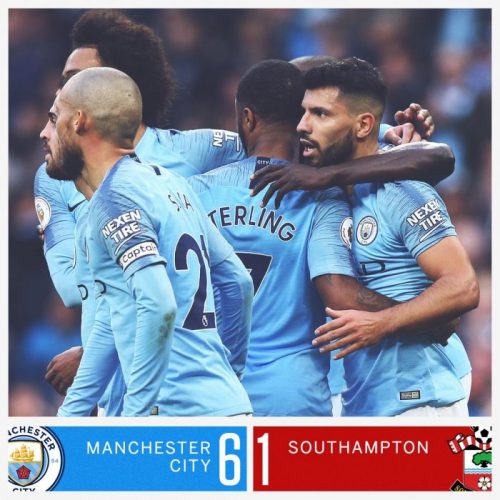 Manchester City cruised to 6-1 victory over a sorry Southampton side to return to the top of the Premier League.

BBC reports that City took just six minutes to open the scoring as Wesley Hoedt smashed an attempted clearance of Leroy Sane’s cross into his own net, before Sergio Aguero doubled their lead by tapping in Raheem Sterling’s cross.

David Silva slammed home their third from Sane’s flick-on after 18 minutes but Danny Ings did pull one back from the spot after Ederson brought him down in the area.

Sterling then netted either side of the break to complete an impressive personal performance, while Sane added a late sixth to cap off a fine afternoon for Pep Guardiola’s men.

Both of the England forward’s goals were assisted by Aguero, as the Argentine first crossed for Sterling to stroke in, before a slide-rule pass enabled the 23-year-old to finish emphatically.

Guardiola’s side have now won eight of their past nine matches across all competitions, although Ings’ penalty was the first league goal they have conceded in six games.