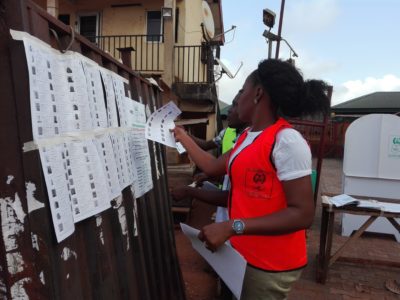 The Independent National Electoral Commission (INEC) in Enugu State has commenced display of voters’ register in all the 260 wards of the state.

Mr. Emeka Ononamadu, the Resident Electoral Commissioner of INEC in Enugu State said this in an interview with the News Agency of Nigeria (NAN) on Monday.

“As of today, we are already pasting the voters register for display beginning from tomorrow (Nov. 6) in line with the Election Project Plan (EPP).

“The exercise will be done on ward-to-ward basis across the 17 Local Government Areas of the state,’’ he said.

The REC said preparations were in top gear to make sure the general election was not only hitch-free but fair and credible.

“In Enugu State, INEC has concluded the monitoring of all party primaries in schedule and we have also displayed the particulars of the presidential, governorship, National and State Assembly candidates.

“The printing of the last tranche of the permanent Voters Card (PVC) will soon be completed so it can be available to the electorates before the election.

“These and many I have mentioned just to show that the commission is beating deadlines and in trying to beat deadlines, it is not defaulting in any of the electoral plans based on the EPP,’’ he said.

Ononamadu disclosed that the commission had embarked on Voters Education and Publicity (VEP) using the mediums of radio, newspapers, Television, churches and mosques.

He added that the one day meeting with Civil Society Organisations (CSOs) held in Enugu was also part of Voter Education for the electorates.

On the issue of uncollected PVC’s, Ononamadu said the commission was beginning to overcome such through the effort of major stakeholders.

“Enugu State today is part of the states with the lowest number of uncollected PVC,s and I must commend the relevant stakeholders for ensuring that we achieve this feat.

“For three weeks now, our officers have been going from ward to ward in all the 17 Local Government Areas of the state to distribute the PVCs.

“People also go to our offices in all the local government areas everyday to collect their PVCs because I am aware of this and it is encouraging.

“However, the names of those whose cards are available but are yet to collect them have been printed and would be posted in communities and other strategic points.

“The essence is for friends, relatives and other well meaning individuals who come across such list to help notify the affected persons through word-of-mouth communication,” Ononamadu noted.

The INEC REC also said sensitization of its Ad-Hoc staff especially corps members to prepare their minds before the proper training had started.

He however,said the date of the training for its Ad-Hoc staff in the state would be announced soon.

Ononamadu said the commission was aware of its numerous challenges especially at the state level and it was working to surmount them and deliver on its mandate of conducting credible and fair elections.

“Also, the commission is not unaware of the new twist that election in Nigeria is beginning to take and the dynamics that played out during the recently conducted elections and party primaries.

“We are working hard to block such loopholes and make sure the coming election is very transparent and devoid of any electoral manipulation.’’

The INEC Commissioner, therefore, warned that any information not coming directly from INEC or its reliable channels and platforms should be disregarded.

The REC noted that certain individuals might want to take advantage of the electioneering period to pass wrong information and make people fall victim.