Labour insists on strike on Tuesday, shuns meeting with FG 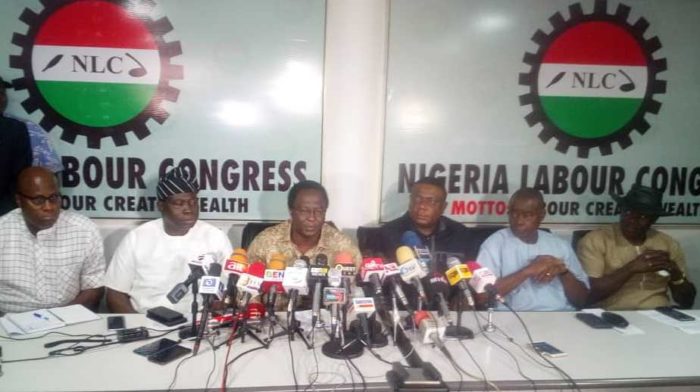 Punch reports that Mustapha, who spoke before the meeting went into closed session, gave an indication that the tripartite committee on national minimum wage set up by the Federal Government would be concluding works on its report on Monday.

He said the Federal Government was waiting for the report to commence processes leading to the enactment of a law on the new minimum wage. He explained that the report would still go through the National Economic Council and the Council of State before an Executive Bill would be sent to the National Assembly on the issue. The SGF said the outstanding issues left for the committee were to harmonise the 15th chapter of the report, harmonise figures and submit report to the President.

Mustapha said, “I assure you that the government is waiting for the report and will immediately set up processes required for implementation. Hopefully, their work would be concluded when they meet tomorrow (Monday) and append their signatures to the report.

“They will then transmit to me and I will seek an audience with the President to present it to him. The report will go through NEC, Council of State before a draft executive bill will be sent to NASS.

“I am awaiting the report of the committee. They will meet tomorrow (Monday) at 11am. Mustapha said ability to pay was critical in taking a decision on the minimum wage. He noted that a lot of states were still finding it difficult to pay the current minimum wage. He recalled that the Federal Government instituted bailouts for the purpose of helping the states to meet up.”

However, the Nigeria Labour Congress, NLC, has said it will no longer enter into any negotiation with the government on a minimum wage for workers.

NLC, which is one of the umbrella bodies for workers, made the position of labour known on Sunday, even as it declared that workers would commence a nationwide strike on Tuesday as scheduled.

Punch reports that the General Secretary of the NLC, Peter Ozo-Eson, said “The strike is going on. Nothing has changed. The strike will begin on Tuesday. That is the directive that has been given. It will be a total strike.”

Asked if oil workers would join the strike, Ozo-Eson said, “All trade unions in the country have agreed to go on strike and we expect every union to go on strike from Tuesday.”

On negotiations between the Congress and the Federal Government, Ozo-Eson said, “Negotiations have ended. Yes, we have a meeting of the tripartite committee on Monday and we will attend as long as it is to sign the report of what has been agreed. We will sign that so that it can be submitted to the government. We will not change our position.”

President Muhammadu Buhari had on November 27, 2017 approved the appointment of a 30-member tripartite National Minimum Wage Committee for negotiations on a new national minimum wage for the country.

The committee comprised representatives of the government, organised labour and the private sector.

The organised labour collectively demanded that the minimum wage be increased from N18,000 to N65, 000 but all parties were said to have agreed to N30,000 after over a year of negotiations.

However, the government announced N24,000, a move which caused the unions to declare a strike.

When reminded that the National Industrial Court had reportedly barred the unions from embarking on strike, the NLC general secretary said the body had not been served with the court processes and was therefore unaware of the development.

Justice Sanusi Kado of the National Industrial Court of Nigeria in Abuja had on Friday reportedly given an order stopping the strike following an ex parte application moved on behalf of the Federal Government by the Solicitor-General of the Federation and Permanent Secretary, Federal Ministry of Justice, Mr Dayo Apata.

The judge said the order of interim injunction was made due to the urgency of the matter and the need to protect the overall interest of the public. He directed that the orders stopping the planned strike be immediately served on both the NLC and the TUC.