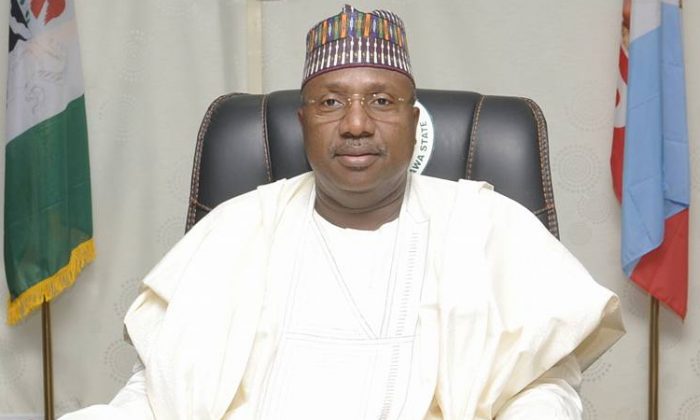 Adamawa House of Assembly Speaker Alhaji Kabiru Mijinyawa said the House will not honour request by a group to probe alleged certificate forgery against Gov. Muhammadu Bindow, because the matter is before a court.

A political pressure group, the Black Cap Revolution Movement had on Friday, stormed the Adamawa House of Assembly complex, demanding the House to probe the allegation against the governor.

Mijinyawa made the clarification at the Monday plenary of the House while briefing members on receipt of letter from the pressure group.

“By the House standing rules, we cannot discuss anything that is before the court,” he said.

The House, also at the plenary, invited the State Commissioner for Health, Dr Fatima Atiku and other principal officials of the Ministry of Health, including the Accountant-General of the state, Mrs Augustina Wandamiya to appear before it on Thursday.

The House said the invitation of the officers was over nonpayment of six month salaries of some recruited health workers.

The House also resolved to constitute an Ad-hoc Committee, under the chairmanship of the Majority Leader, Hassan Barguma (APC-Hong), to probe the alleged utilisation of N2 billion Central Bank of Nigeria (CBN) agricultural loan.

The CBN was said to have granted the loan to state through the Adamawa Agricultural Development and Investment Ltd, (AADIL).

Chairman of AADIL Board, Mr John Garba and the Managing Director of AADIL Mr Ibrahim Dasin who appeared before the plenary were referred to the ad-hoc committee.