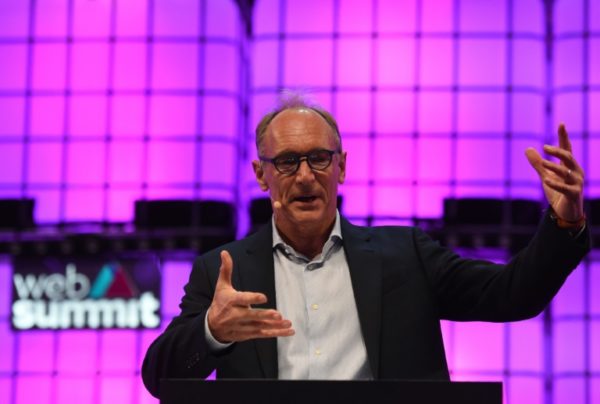 The inventor of the World Wide Web, British computer scientist Tim Berners-Lee on Monday lamented the debasement of the world wide web, since he founded it almost 30 years ago.

“All kinds of things have gone wrong. We have fake news, we have problems with privacy, we have people being profiled and manipulated,” he said in an opening address.

Berners-Lee, who in 1989 invented the World Wide Web as a way to exchange information, said the internet had deviated from the goals its founders had envisaged.

He now called for a “contract” to make internet safe and accessible for everyone as Europe’s largest tech event began in Lisbon, Portugal amid a backlash over its role in spreading “fake news”.

Some 70,000 people are expected to take part in the four-day Web Summit, dubbed “the Davos for geeks”, including speakers from leading global tech companies, politicians and start-ups hoping to attract attention from the over 1,500 investors who are scheduled to attend.

Tech firms now find themselves on the defensive, with critics accusing them of not doing enough to curb the spread of “fake news” which has helped polarise election campaigns around the world and of maximising profits by harvesting data on consumers’ browsing habits.

Berners-Lee, 63, called on governments, companies and citizens to iron out a “complete contract” for the web that will make the internet “safe and accessible” for all by May 2019, the date by which 50 percent of the world will be online for the first time.

He has just launched Inrupt, a start-up which is building an open source platform called “Solid” which will decentralise the web and allow users to choose where their data is kept, along with who can see and access it.

Solid intends to allow users to bypass tech giants such as Google and Facebook. The two tech giants now have direct influence over nearly three quarters of all internet traffic thanks to the vast amounts of apps and services they own such as YouTube, WhatsApp and Instagram.

Employees of Google, Facebook and other tech giants have in recent months gone public with their regrets, calling the products they helped build harmful to society and overly addictive.

Tech giants are also under fire for having built up virtual monopolies in their areas.

“I think technology is going through a funk… it’s a period of reflection,” Web Summit founder and CEO Paddy Cosgrave told AFP.

“With every new technology you go through these cycles. The initial excitement of the printed press was replaced in time by a great fear that it was actually a bad thing. Over time it has actually worked out OK.”

Among those scheduled to speak at the event is Christopher Wylie, a whistleblower who earlier this year said users’ data from Facebook was used by British political consultancy Cambridge Analytica to help elect US President Donald Trump — a claim denied by the company.

Another tech veteran who has become critical of the sector, Twitter co-founder Ev Williams, will on Thursday deliver the closing address.

He left Twitter in 2011 and went on to co-found online publishing platform Mash, which is subscription based and unlike Twitter favours in-depth writing about issues.

The problem with the current internet model is that negative content gets more attention online, and thus gain more advertisers, according to Mitchell Baker, the president of the Mozilla Foundation, a non-profit organisation which promotes Internet innovation.

“Today everyone has a voice but the problem is… the loudest and often most violent voices get magnified because the most negative, scariest things attract our attention,” she told AFP in a recent interview.

The Web Summit was launched in Dublin in 2010 and moved to Lisbon six years later. The Portuguese government estimates the event will generate 300 million euros ($347 million) for Lisbon in hotel and other revenues.