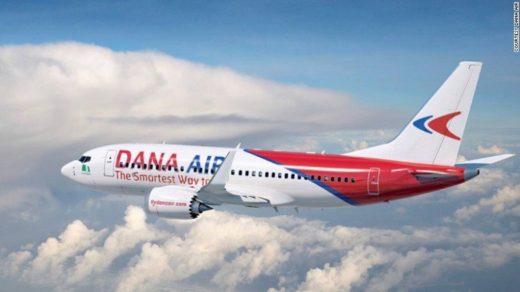 Dana Air on Monday assured its customers of its commitment toward ensuring that they do not bear the impact of the imminent strike by labour unions scheduled to begin on Nov. 6.

Dana Air, in a statement signed by its Media and Communications Manager, Mr Kingsley Ezenwa, said the airline would be available to reschedule or reroute its passengers at no cost to them.

Ezenwa said the airline rued the inconvenience of the likely effects of flight disruption on its passengers and the huge loss of income on its part.

He, however appealed to the Federal Government and the organised labour to find a middle ground and resolve the issue in the overall interest of Nigerians and the economy.

Ezenwa said:”We regret the inconveniences on the part of our guests who are already on our scheduled flights for the week, and the likely loss of income on our part.

“We appeal to the federal government and the labour groups to find a middle ground and resolve the issue in the overall interest of Nigerians and the economy.”

He said the airline would be available on phone, mail, and on all its social media handles to attend to requests from its guests.

On Monday night, government and labour officials were still at a meeting in last-minute efforts to avert the strike.