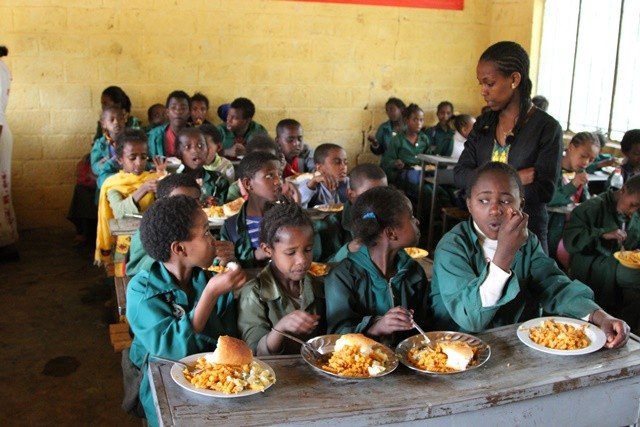 Uwais disclosed this in Abuja, when she received a delegation from the Democratic Republic of Congo (DRC) on a study tour of Nigeria to learn from the social intervention programmes in the country.
She noted that 9 million children are currently being fed under the programme in 26 states as a way of encouraging schools enrolment.

She noted further that the programme had created a value chain in the agricultural sector and had also led to the employment of Nigerians thereby creating market for agriculture.
“Presently, each child eats at least an egg in a day, adding up to 6.8million eggs being consumed weekly by children under the programme in just 26 states.

“So, the poultry farmers are now doing so much to provide eggs for the schools because every meal is a balanced diet and every child must have at least one egg.
“We need to slaughter 594 cows every week for the pupils and 83 metric tonnes of fish is consumed weekly in just 26 states and more states are coming on board.

“Farmers are growing and requesting for rice meals now because they are saying I was growing 20 bags but because of the programme, I now provide more so I need a rice meal.’’
Uwais said that farmers were now calling on the government to support them to engage in mechanised farming.

She added that the programme was helping the agricultural sector, by providing markets while women were also being employed as cooks and they in turn employ others.
“The cooks are employing people to wash and serve in class rooms ,so imagine a child being fed and the cook is the mother while the father is a farmer that provides the food stuff, ” she said.

Abimbola said mechanism had been put in place for the maintenance of quality standard, adding that the cooks were all trained on hygiene.
She said the programme was developing agriculture while nourishing the young minds and keeping them in school.

She said that the programme had been running for three years now, adding that efforts had been put in pace for its sustainability even at the end of the administration.

Mr John Mugabushaka, Chief of Staff, Ministry of Social Affairs, DRC and head of the delegation said they were sent by the DRC government on an experience sharing tour.

“We have been sent by our Ministry of Social Affairs through the DRC government with the purpose of learning how Nigeria runs its social programme,’’ he said.

Mugabushaka explained that the purpose of the visit was to learn from the way Nigeria runs its social programme with a view to domesticating it in the DRC, adding that so far, they have learnt a lot.