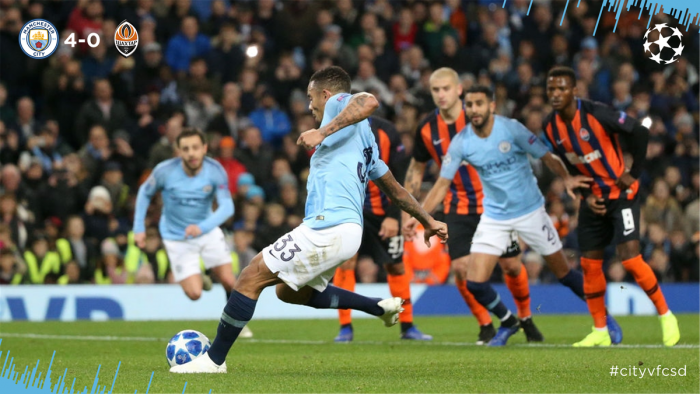 Jesus scores one of his goals for City

Manchester City recorded their biggest win in the Champions League as they thrashed Shakhtar Donetsk 6-0,  but an injury-time goal in the other group match meant they must wait to secure qualification for the last 16.

BBC reports that Pep Guardiola’s side are top of Group F and were heading into the next phase, until 10-man Hoffenheim came from 2-0 down and scored a 92nd-minute equaliser to draw 2-2 with Lyon.

But City will qualify as group winners with one game to spare if they beat Lyon in France on Tuesday, 27 November.

A hat-trick from Gabriel Jesus, including a bizarre penalty, and goals from David Silva, Riyad Mahrez and Raheem Sterling gave City a 6-0 win, eclipsing their 5-0 away success against Steaua Bucharest in the first leg of a play-off tie in August 2016.