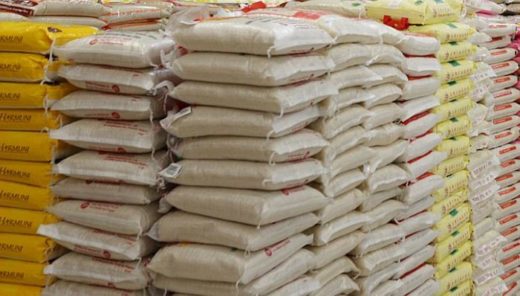 The Central Bank of Nigeria (CBN), says the volume of rice importation into Nigeria (in metric tonnes) has declined drastically in 2018, judging by figures obtained from various official sources.

Mr Isaac Okorafor, Director, Corporate Communications at the CBN, made this known in a statement on Tuesday in Abuja.

Okorafor said that figures obtained from India and Thailand, (dominant rice exporters to Nigeria) indicate that as at September, Thailand had so far exported about 5,161 metric tonnes of rice to Nigeria, while India sold only 426 as at July.

Attributing the reduction to concerted efforts by the Ministry of Agriculture and Rural Development and the interventions of the CBN, he said that the Bank had not allocated any foreign exchange for the importation of rice this year.

“The figures being bandied in certain quarters were based on unrealistic assumptions such as satellite mapping of farms, expected demand by politicians for election campaigns and expected losses from flooding.

“All of these led to unauthentic conclusions that the country had imported or could import 400,000 more metric tonnes.”

Okorafor added that the combined figure of 5, 587 tonnes of rice imports from India and Thailand may have been rice imported on not-valid-for-forex basis.

He recalled that the Federal Ministry of Agriculture and Rural Development and the CBN had been collaborating to reduce the volume of rice importation through what has become famed as the Rice Revolution.