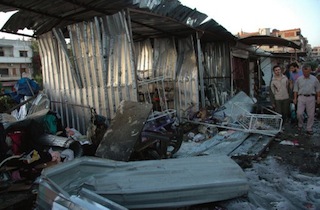 Three civilians and a paramilitary Soldier were killed when Maoist Rebels blew up a vehicle in India’s Central State of Chhattisgarh on Thursday, as attacks increase ahead of polls in the region.

The militants targeted a minibus that was carrying seven civilians and soldiers in the Dantewada district, a known rebel stronghold.

The bus driver, its conductor and cleaner, as well as a soldier, were killed when the rebels detonated a landmine that tore through the vehicle, senior police official D Ravishankar told reporters.

The left-wing rebels have called for a boycott of the state legislative elections and have carried out three attacks by Oct. 25.

The Maoist guerrillas, who reject parliamentary democracy, say their armed rebellion is to secure rights for the poor and marginalised.

They operate in forest belts in several states across India.

Chhattisgarh is one of the states worst affected by the Maoist insurgency, which has left more than 7,660 civilians, militants and security personnel dead since 2005, according to the South Asia Terrorism Portal.