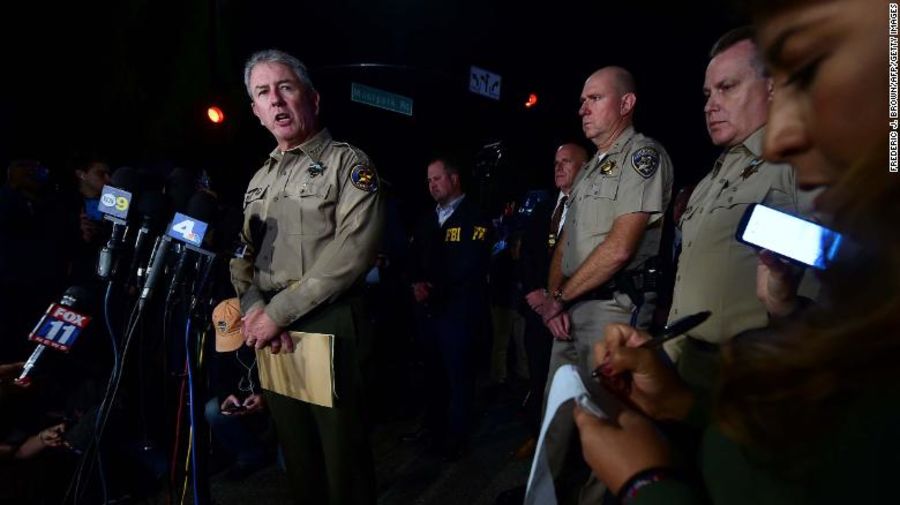 Ventura County Sheriff Geoff Dean has described the scene of the bar shooting in Thousand Oaks, California as "horrific."

Twelve people killed in shooting at the Borderline Bar and Grill in Thousand Oaks, California.

Multiple students from Pepperdine University were at the Borderline Bar & Grill in Thousand Oaks when a gunman opened fire, it said in a tweet on Thursday.

Pepperdine is a university in Malibu, California; it’s about a half hour drive from the venue.

Pepperdine officials are working with authorities and will provide updates as more information is available. The University offers its deepest condolences and is praying for everyone involved in tonight’s tragic events.

Ventura County Sheriff Geoff Dean has described the scene of the bar shooting in Thousand Oaks, California as “horrific.”

“It’s a horrific scene in there, there is blood everywhere and the suspect is part of that, and I didn’t want to get that close and disturb the scene and possibly disturb the investigation,” he said, adding that the motive is still unclear.

Dean said investigators had not found any type of assault rifle within the bar.

“Right now as far as we know there was only one handgun, but that could certainly change as we do a more thorough search of the building.”

The suspected gunman in the fatal Thousand Oaks bar shooting has not been identified yet, Ventura County Sheriff Geoff Dean said, who added that the FBI are assisting. The suspect was dead when police arrived on the scene.

Dean said, “It’s well too early to know if he took his own life.”

Authorities are investigating initial reports that a smoke bomb was used but continued that they had not found anything to support this yet.

“We have called in our bomb team to go through and a couple of bomb dogs here that are checking the area. But we haven’t found any other explosive device or confirmation there that there was a smoke device.”

Madeline Carr, news editor at the student paper the Pepperdine Graphic, knew some of those who were inside the Borderline Bar & Grill when the shooting started.

She told CNN the bar opens up to anyone over the age of 18 on Wednesdays and described it as a “fun spot for dancing.”

“Pepperdine’s a pretty small community, a pretty sheltered community … so it’s one of these events that it’s hard to rationalize it happening here,” she continued.

Carr said that it was heartbreaking to hear that Sgt. Ron Helus, one of the first police officers to respond to the mass shooting, had died.

“You hear about these shootings and the people that are the first responders and that really lay down their lives to help other people… I think it’s remarkable what these people do and I can’t say enough for individuals like him,” she said.

“It’s heartbreaking and I know that the community will definitely be rallying together for the sergeant and the other individuals.”