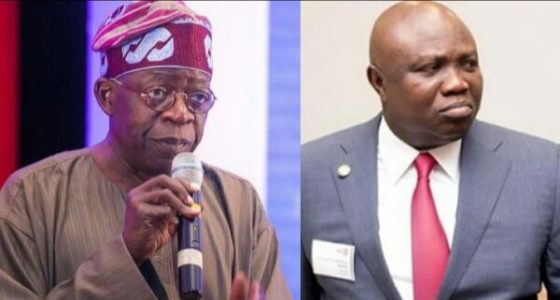 Adefuye spoke at a reconciliation meeting held at CMD Shangisha, Lagos, which brought together many stalwarts of the party in the district.

Ambode, who hails from Epe Zone in the senatorial district, lost the governorship ticket at the party primaries to Mr Jide Sanwo-Olu, a former Commissioner in the state.

Adefuye, also the APC Lagos East Senatorial District Leader, said that leaders of the party in the district did their best to have a meeting with Ambode before the issue went out of hands.

“We saw this crack four months ago and we decided to meet with our Lagos Central Senatorial Leader, Alhaji Tajudeen Olusi and we went to see Asiwaju Bola Tinubu.

“We asked Tinubu if there was any problem, and he said that there was a problem and he narrated it.

“We prostrated and asked him to call Ambode and speak with him.

“We left the place and started calling Ambode to give him a hint of the meeting, but he did not pick our calls. Asiwaju Tinubu said that he was not picking his calls too. I actually tried my best,’’ Adefuye said.

The party leader said that he spoke with Vice President Yemi Osinbajo during Sallah that Asiwaju Tinubu would not return Ambode and he urged Osinbajo to speak with Tinubu.

According to him, efforts were also made to visit the Epe home of the governor on the second day to see him which proved abortive.

“We rose up to defend Ambode. We didn’t just follow Asiwaju like sheep, we fought and we tried.

“Those of us in the East nearly burst into tears for the opportunity we lost in Lagos East.

“I fought tooth and nail to make sure that the position was not taken away from us. It was a great opportunity that we lost.

“Anyone that is not a party man should not be elected into positions. Take this advice and make sure you don’t make the same mistake,’’ Adefuye said.

According to him, “politics is all about what you can get for your people and every politician must fight for the people.”

He said political office holders must fight for the people to prevent them from revolting, saying that there were a lot of things leaders could do to gain the respect of the people and the party.

The party chieftain said that APC leaders in the district were committed to ensuring peace and unity among the members for the purpose of moving the party forward.

“I want to assure you that it is part of our responsibilities to ensure that we remain one. Politics is dynamic; it is not for uncontrolled display of anger. This life is also dynamics. Let us be together,’’ he added.

On the disunity in the district, Chief Lanre Rasak, another member of the GAC, said that the district had not been able to resolve its issues like those in the Lagos Central and West Districts.

According to Rasak, the major challenge Tinubu has with the district was lack of united voice and divisions.

Also, the Deputy Senatorial Leader of Lagos East, Alhaji Akanni Seriki, commended Tinubu for all his efforts to unite and project the party.