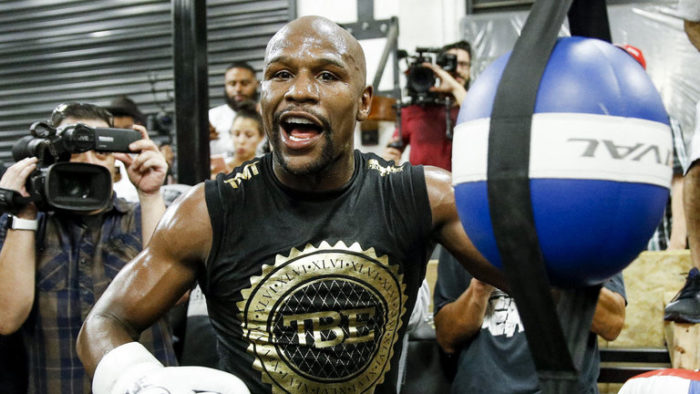 Floyd Mayweather said on Wednesday that he never agreed to come out of retirement to fight a Japanese kickboxer on New Year’s Eve and was blindsided when the event was announced this week at a news conference he attended in Tokyo.

Mayweather said on his Instagram account that he only agreed to a three-round exhibition in front of a small group of wealthy spectators for a very large fee with no intention of it being represented as an official fight card or televised worldwide.

He wrote that “once I arrived to the press conference, my team and I were completely derailed by the new direction this event was going and we should have put a stop to it immediately.

“I want to sincerely apologise to my fans for the very misleading information that was announced during this press conference and I can assure you that I was completely blindsided by the arrangements that were being made without my consent nor approval.”
Mayweather, 41, said he was hesitant to create a disturbance at the news conference by combating what was said for the sake of what he described as several fans and attendees that flew in from all parts of the world to attend the event.

The man known as “Money” Mayweather, who retired in 2017 with a 50-0 record over an unparalleled boxing career during which he won world titles in five different weight classes, also said he has no plans to put his unblemished mark on the line.

“I am a retired boxer that earns an unprecedented amount of money, globally, for appearances, speaking engagements and occasional small exhibitions,” wrote Mayweather.

At the the news conference, it was announced that Mayweather would top the bill at Japanese mixed martial arts promotion Rizin Fighting Federation’s next card on Dec. 31 against a Japanese kickboxer with the rules yet to be determined.

Mayweather’s opponent was introduced as Tenshin Nasukawa — a 20-year-old who competes in both MMA and kickboxing and has won all four of his cage fights.

“I want it to be clear that I, Floyd Mayweather, never agreed to an official bout with Tenshin Nasukawa.

“In fact (with all due respect) I have never heard of him until this recent trip to Japan,” wrote Mayweather.

Rizin did not immediately reply when asked for comment.