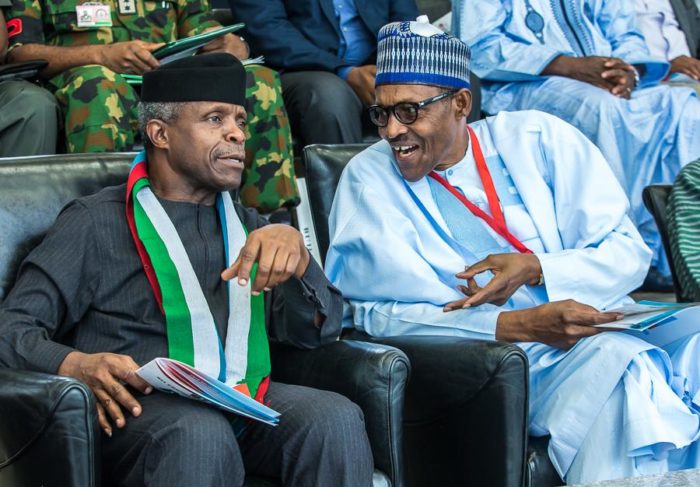 President Buhari and VP Osinbajo at the National convention of the All Progressives Congress at the Eagle Square, Abuja

The President General of the Buhari, Osinbajo Hope Movement, (BOHM), Seyi Bamigbade at the weekend said they have constituted grassroots mobilization teams in different parts of the country to ensure re-election of President Muhammadu Buhari and his deputy, Professor Yemi Osinbajo in 2019 general election.

Speaking with journalists in Lagos, Seyi said they decided to constitute the team to be able to reach every Nigerian irrespective of their locations.

He urged all members of the group to embark on mass grassroots mobilisation of Nigerians who had registered to vote for the victory of the presidential candidate of the All Progressive Congress (APC), President Muhammdu Buhari and his running mate in the 2019 general elections.

Seyi, who had earlier addressed the National meeting of the group held on Saturday in Abuja said BOHM was one of the support groups working to ensure that President Muhammadu Buhari and his running mate, Vice President Yemi Osinbajo, were reelected as President and Vice President of Nigeria during the 2019 polls.

According to him, the association had vowed to do everything within the laws of the land to mobilize over 80 million Nigerians to vote for Buhari/Osinbajo in 2019.

He lauded the Board Of Trustee Chairman, Senator Abu Ibrahim National Committee For Support Group (NCBSG) and Rt. Hon. Gideon Sammani, Senior Special Assistant to the President (Political) for their dedication to the nation’s development based on continuity.

Also speaking, the National Coordinator of the group, Ike Okafor said, “I urge all our members to brace up to do it again by voting extra vote in the coming election.”

Okafor said Buhari became the flag bearer of APC not by fortuitous, but by hard work and commitment to make Nigeria great again.

He said: “It is the responsibility of all our members to go to all the nooks and crannies of our country, Nigeria by campaigning based on issues for Buhari/Osinbajo ticket.”

The Secretary General of the group, Adamu AbubakarSadiq Abdulrahman, said that the aims and objectives of the group were to canvass and solicit for support across the 774 Local Government Areas in the country for the election of Buhari/Osinbajo in 2019.

Adamu said: “To create a dynamic platform for the mobilisation of grassroots supporters for President Muhammadu Buhari in all the wards and polling units in Nigeria.