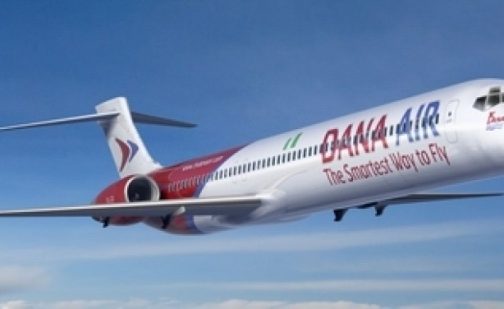 Dana Air is Grand daddy of Nigeria’s airlines. One of the planes in its collection is 28.1 years old, an age many planes ought to have been retired

Nigeria’s commercial airlines have the oldest aircraft fleet in Africa, with the age of an aircraft in one of the airlines, being 28.1 years, the age many planes are either due for retirement or decommissioning or may have been retired at least some years earlier.

A random check of the fleet of Nigeria’s airlines, shows that Arik Air has the youngest fleet of 23 aircraft, with average age of 11 years. Dana Airlines, which started operations in November 2008 has the oldest fleet of a range of McDonnell Douglas MD-80, with one of them, still in use, 28 years and one month old.

According to data provided by planespotters.net, Dana Airlines aircraft are the grand daddies of planes plying the Nigerian skies. At present, it operates six aircraft, all MD-80s, with the youngest delivered October 2014 and registered as 5N-BKI. It is now 22.3 years old. Another plane in the fleet, 5N-SAI is 28.1 years old.

Max Air, which entered the Nigerian aviation business just this year, has six aircraft, with average age of 20.4 years. Apart from an Embraer ERJ-145, which is less than 10 years old, all the other aircraft in its fleet are 20 years and above.

Aero Contractors, Nigeria’s oldest airline with a peerless safety record, has 11 aircraft in operation. Among them are nine Boeing 737, with an average age of 26.5 years and two De Havilland Canada DHC-8 Dash 8 planes, aged 17.8 years. The airline, which was founded in 1959, is now being run by AMCON, along with Arik Air, following huge indebtedness to the banks.

Arik Air entered Nigeria’s turbulent aviation business in October 2006 with a grand ambition to operate with new aircraft, instead of the creaky ‘Tokunbo’ aircraft being used then and now by airlines in the country. So it ordered new planes, with the oldest in its fleet today being four Bombardier CRJ-900 planes delivered in 2006 as new. They are now 12.6 years old. Arik also has one Bombardier CRJ-1000 bought new in 2014. It is now five years old. It has 13 Boeing 737, with average age of 12.1 years and an Airbus A340, which is 10.4 years old.

Rwandair, with Pan-African ambition like Ethiopian, South African Airways and Royal Air Maroc, has 13 aircraft, with two more Airbus A330 on order. The average age of its fleet, that comprised six Boeing 737, two Airbus A330 and two Bombardier CRJ-900 is 7.1 years. The oldest plane in its collection is one De Havilland Canada DHC-8 Dash 8, which is 11.5 years old, far much younger than many of the planes flying in Nigeria’s airspace.

A recent study by SGI Aviation, ordered by IATA said the average retirement age of a freighter aircraft is 32.5 years and for a passenger aircraft 25.1 years.

The retirement age dropped to 27.6 years in the last six years due to the record-high oil prices in early 2010s.

According to another report, some of the factors governing the retirement of aeroplanes are pressurisation cycles, hours of flights and fuel efficiency.

A Boeing 747 can endure about 35,000 pressurization cycles and flights—roughly 135,000 to 165,000 flight hours—before metal fatigue sets in and is retired at approximately 27 years of service, said the report written two years ago.