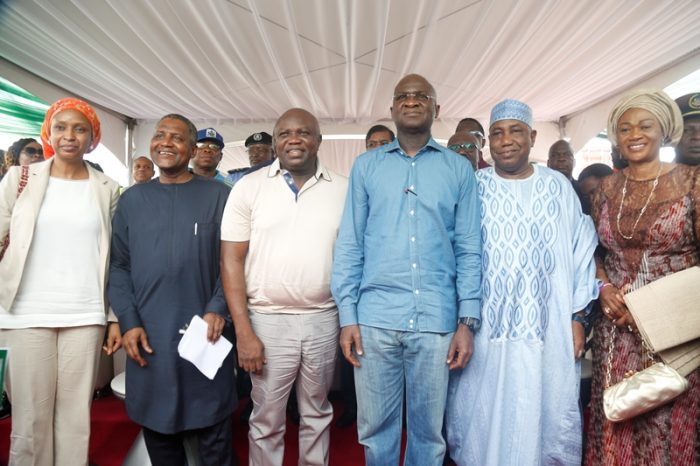 Lagos State Governor, Mr. Akinwunmi Ambode on Saturday lauded the Federal Government for the commencement of the reconstruction of the Apapa-Oshodi-Oworonshoki-Ojota Expressway, saying that the project would bring permanent relief to motorists and residents over the perennial gridlock in the axis and enhance movement within the State.

Ambode, who spoke at the flag off ceremony in Apapa, held under the auspices of the Federal Ministry of Works, said the development was a historic moment for residents in the State as it was the first time that any government would embark on a total reconstruction of the road since inception.

He said it was particularly gratifying that the project would be done using concrete, expressing optimism that it would ensure that the road would last for over forty years.

“Whatever it is that has been taking place in this particular project has always been rehabilitation and every Nigerian should be reminded that this road has been in place for more than 40 years.

“This is the first time the government at the centre is embarking on reconstruction, that means we are going to excavate everything all the way from Apapa, Oshodi to Oworonshoki and Ojota Expressway and actually reconstruct it, using concrete instead of asphalt because Lagos is below sea level, if you use asphalt, within seven to eight years, it would wash away because we are under water.

“So the concrete template is being used to give us a long lasting solution to this Apapa gridlock and this road will last for more than 40 years and we believe strongly that the PPP platform that has been given to this project to allow the private sector invest their money in it being driven by Alhaji Dangote is the best solution that we can use to develop public infrastructure right now and we must commend the Minister for that,” the Governor said.

He also thanked the Federal Government for approving the construction of the Agbara Seme Expressway, saying that while the State Government was committed to completing the ongoing works from Eric Moore to Okokomaiko, the decision to award the Agbara axis to Seme as a step in the right direction.

Besides, the Governor said beyond road reconstruction, emphasis must be placed on evolving a workable interconnectivity of rail, road and water transport systems, while commending the Federal Government for taking steps towards that effect.

“You would recall a few months ago that the Vice President was here in Lagos to activate the rail construction that is taking place between Apapa-Iddo-Agege-Abeokuta-Ibadan routes.

“What this means for us is that while we are constructing this and we are able to deliver on the rail project, goods can be carried out straight to the Ports from the rail. So by combining the rail and road solution that is being offered us by the Federal Ministry of Works and also Transport and totally by the Federal Government, Lagos State is proud to say that this is a major solution that would bring comfort to al the residents of Apapa,” Governor Ambode said.

He thanked the Minister of Works, Power and Housing, Mr. Babatunde Fashola for ensuring the refund to the State Government for some of the Federal projects embarked upon, saying that his administration was already in the process of utilizing same to deliver other ongoing projects in the next few months.

The Governor, however, seized the occasion to appeal for understanding, saying that though the commencement of the project might bring some inconvenience, the end result would be a permanent solution to the gridlock that has bedevilled the area over the years.

He assured that the State Government on its part would deploy more traffic and enforcement officers to ensure free flow of traffic in the course of the construction.

“The future of development and infrastructure actually lies in the present administration and the future of the prosperity of this country lies in the hands of President Buhari and we make no mistake about it that it is in our own interest that we continue to support the present government of APC at the centre and also at the State for continuity and greater deliverables of infrastructure, goods and services,” Governor Ambode said.