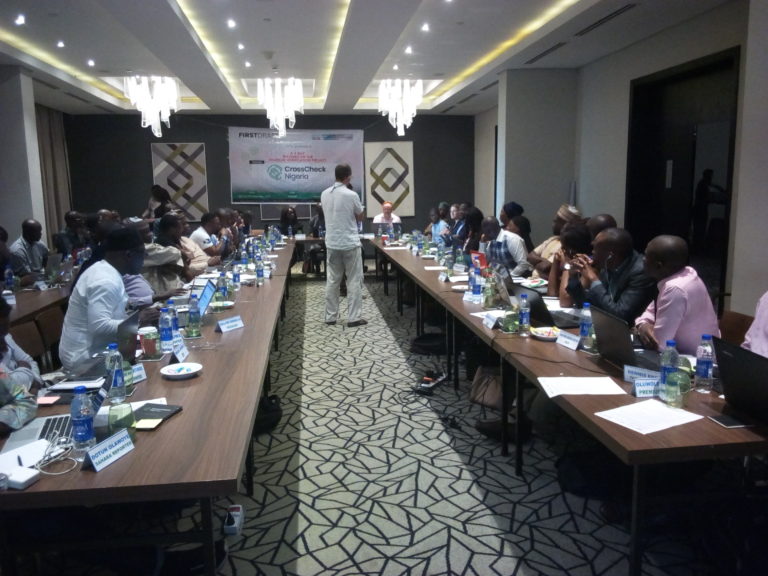 Participants at the boot camp training programme on Monday Nov. 26 2018 in Lagos

Fifteen media organisations, including the News Agency of Nigeria (NAN), have joined forces to combat fake news and misinformation ahead of the 2019 general elections.

CrossCheck Nigeria, due to be launched on Wednesday, will be coordinated by the International Centre for Investigative Reporting (ICIR), an independent and non-profit news agency in the country.

To this end, a two-day boot camp (training programme) opened in Lagos on Monday for about 46 journalists drawn from the participating media organisations.

Addressing participants at the opening session, the Executive Director of First Draft, Dr Claire Wardle, said the project was aimed at improving the quality of information available to the voting public.

Wardle added that CrossCheck Nigeria would also help to debunk misinformation and fake news and sanitise the media space in the run-up to the elections.

She explained that the boot camp was designed to teach the participants about the new verification technology to be deployed for the project, and how to work in the media coalition.

According to her, the project will help the public to understand not only what to trust, but also why.

In his address of welcome, the Executive Director of ICIR, Mr Dayo Aiyetan, expressed concern about the “weaponisation of information either to deceive the public or injure the reputation of opponents’’.

Aiyetan stated that recent local elections in the country had shown that “the social media, including Facebook, Twitter and WhatsApp, have become avenues for politicians to spread misinformation, rumour, falsehood and fake news.

He noted that the media had a responsibility to verify information being churned out on social media to ensure that they were true.

“Journalists need to learn the skills to verify and fact-check such misinformation and debunk them before they mislead people or cause harm,” he stated.

The ICIR boss explained that under the project, the participating organisations would work together in disproving fake news or misinformation for greater impact on members of the public.

The participating organisations are NAN, The Guardian, Punch, Daily Trust, The Sun, Tribune, Thisday and The Nation.