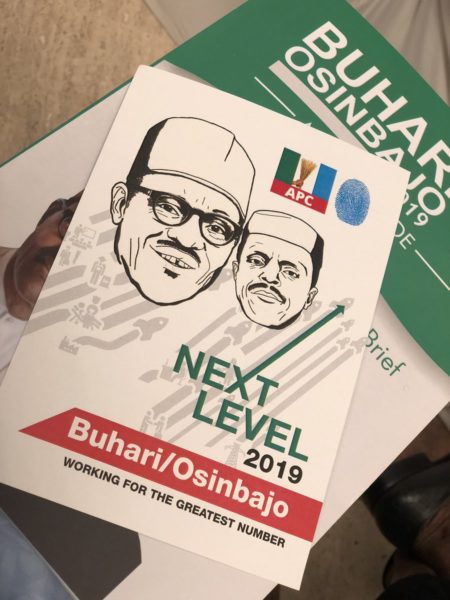 The manuals released by the Buhari:Osinbajo campaign on Sunday

Members of National Youth Council of Nigeria (NYCN), Kogi chapter on Tuesday promised to support the re-election of President Muhammadu Buhari and Prof. Yemi Osinbajo in the 2019 presidential election.

Mr Isreal Alonge, the Chairman of the chapter, made the promise in Lokoja after the “First Kogi Youth Solidarity Walk For Buhari/Osinbajo, Next Level 2019, tagged: “Let’s Do It Again For PMB/Osinbajo.”

Alonge said that the APC-led Federal Government, under the leadership of President Buhari had performed very well especially in the area of youth empowerment programmes and infrastructure development.

According to him, Buhari has empowered many Kogi youths under the FG Social Investment Programme (SIP) such as N-Power, Market Moni Cash Transfer, Home Grown School Feeding, STEM, among others.

“This youth solidarity walk is to tell President Buhari that Kogi youths are in full support of his regime and we are assuring him of our votes in 2019.

“We are doing it again for Buhari/Osinbajo and particularly for assenting to the “Not-Too-Young-To-Run Bill”, thereby enabling more youths to participate in the electoral processes,“ he said.

Alonge said the event was also aimed at sensitising Kogi youths on the need to shun violence, thuggery and other vices before, during and after forthcoming general elections.

“We are also educating our youths to see reasons why they should come out en masse to exercise their civic right by casting their votes rightly.

“We are assuring the people that we shall have peaceful elections in the entire Kogi and Nigeria at large in 2019.”

The youths were received by some Government officials, led by Mr Edward Onoja, the Chief of Staff to Gov. Yahaya Bello.

In his remarks, Onoja commended the youth for the initiative and for reaffirming their unflinching support for Buhari and Osinbajo, saying that they had made the right choice.

Onoja reiterated that Bello and Buhari were committed to youth-oriented programmes which he said had reflected in their appointments and programmes.

According to Onoja, over 12, 000 Kogi youths who had no connection or godfather were benefiting from the N-Power Programme initiated by President Buhari.

He commended Kogi and Federal Governments for performing excellently well in terms of infrastructure, youth empowerment, economy and the fight against corruption.