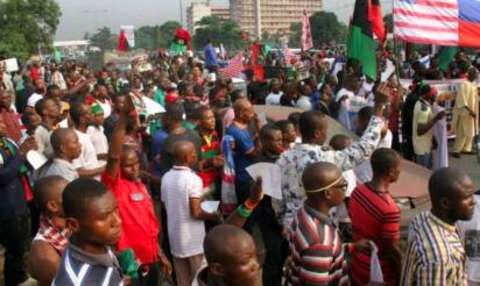 Traders in Nnewi, Anambra, on Tuesday shut down major markets to protest continued detention of their 33 colleagues by the police.

The Police had on Sunday publicly presented 33 suspected members of Indigenous People of Biafra (IPOB), who were arrested after a clash between the outlawed group and security agencies.

The police had also reported that one of its officers was killed during the skirmish.

The Agboedo Motor Spare Parts section of Nkwo Nnewi Market closed their shops first and were joined by other sections in demand of an unconditional release of their colleagues.

Chairman of Agboedo Motor Spare Parts Dealers Association (AMSPDA), Chief Gabriel Chibueze, who took journalists round the market and showed them the shops of the arrested members, insisted that the detained persons were traders.

“We invited the press to help us tell the whole world that the arrested persons are not members of IPOB.

“They are genuine traders doing their legitimate businesses when security officers came into their shops to pick them.

“The arrested traders could not have been involved in the fracas because the location of the protest was not close to the market.

“The place the protest took place is far from the market.

“In order to ensure that the fracas didn’t escalate to the market, we, the executive, closed down all entrances leading to the market while our members continued their businesses.

“Suddenly, we saw a combined team of Police and Army, who broke the entrance gates to the market and started beating our members. They arrested both masters and their apprentices.

According to Chibueze, the initial number of traders arrested were 43, but 33 of them were later paraded by the police.

“We appeal to Nnewi Police Area Commander, the Anambra State Commissioner of Police, the Inspector-General of Police and Gov. Willie Obiano to order the immediate release of the Nnewi traders.

“If they are not released, shutting down of the market will be extended to the other parts of the state and the entire South East,” he said.

The Commissioner for Trade and Commerce in the state, Dr Christian Madubuko, described the incident as “unfortunate”, but assured that efforts were on to restore normalcy.

“It is very unfortunate what happened here. We don’t encourage violence of any sort.

“I was here yesterday for hours and met with the market leaders, dialoguing and seeking solution to the problem.

“I went from shop to shop and from the way they spoke, the traders are bitter, especially the women whose husbands were arrested. I consoled them.

“I can speak authoritatively that the people arrested here are genuine traders. While we seek solution, I appeal to traders to calm down,” Madubuko said.

The Chairman, Nnewi North Local Government Area, Mr Chukwudi Orizu, said that he was nearly caught by the life bullet during the crisis.

Describing the situation as “pathetic,” he said that he had since identified the shops of the arrested persons.

“I’m here to attest that all the arrested persons are genuine traders. It’s a very bad thing to the state.

“We are losing a lot, especially in view of the Christmas season when shopping is at its peak.

“It is not a good image to see all the market in Nnewi being closed down,” Orizu added.