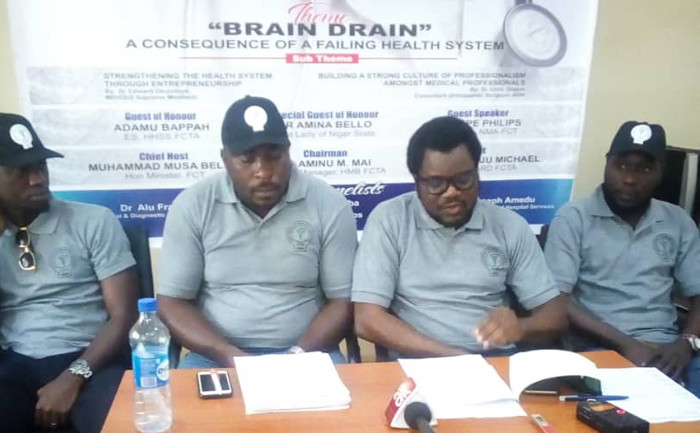 The resident doctors during the briefing

Association of Resident Doctors (ARD) Federal Capital Territory (FCT) Chapter, on Monday appealed to the Federal Government to address the exodus of their colleagues from the country.

Dr Michael Olanrewaju, President of the Association made the appeal at a press conference held in Abuja to herald a week-long activities of the 2018 anniversary of the association.

Olanrewaju said that out of about 80,000 doctors registered with the Medical and Dental Council of Nigeria, less than 50 per cent are currently practising locally while other had left the country.

The theme of the week anniversary is: “Brain drain – A Consequence of a Failing Health System’’.

The theme aims at drawing attention to the plight of the medical practitioners in the country.

Olanrewaju expressed concern that the attainment of universal health coverage was unlikely to be achieved with the current rate of brain-drain among medical doctors in the country.

“The FCT is not left out; doctors are leaving the FCT in droves,’’ he said.

“The week, which is an annual event, will focus on several challenges facing practitioners, which has put Nigerians at the mercy of substandard care, from quacks in the medical profession.

“This has led to a decrease in doctor/patient ratio, and has also affected the quality of healthcare in the country,’’ he said.

On the practice in the FCT, he commended the FCT administration for creating a good working environment for doctors in the territory.

He however appealed to the FCT administration to pay doctors’ skipping arrears for health workers in its service.

He said activities for the week would feature sensitisation programmes on the hazard of drug abuse at the NYSC Orientation Camp, Kubwa.

Other programmes according to him include lectures by experts on health, staying healthy and other aspects of healthy living.

He said the grand finale would feature an award night scheduled for Saturday at the Yar Adua Centre, Abuja.