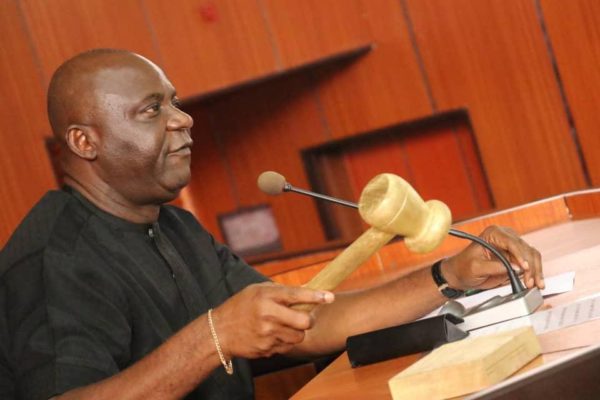 The Akwa Ibom State House of Assembly faced a fresh rumpus this morning, split down the middle, between APC and PDP legislators and two men who claimed to be the legitimate speakers.

Today, a faction led by Nse Ntuen, a member of the APC, who was purportedly elected Speaker last week held a session today and claimed to have suspended 11 members, with former speaker Onofiok Luke top of the list.

There are 26 members of the assembly.

Luke had also convened last week Monday and claimed to have suspended Ntuen, along with four other members.

Ntuen also dissolved all standing committees constituted illegally by the former speaker and adjourned till next week Tuesday 4 December.

The PDP on its Twitter handle accused former governor Godswill Akpabio for masterminding the crisis, which caused the transfer of former police commissioner, Bassey Abang.

The PDP claimed that Ntuen, aided by thugs and the police, stormed the house today to sit.

But the Ntuen group is also accusing the PDP member, Luke of carrying out illegalities, by suspending him and four other members.

On Monday, the new police commissioner Kimo, condemned the crisis rocking the House of Assembly, during a meeting with 20 political parties in the state.

Kimo described the crisis as ‘ugly and worrisome’.

It remains to be seen what Luke’s next move will be before Tuesday 4 December.