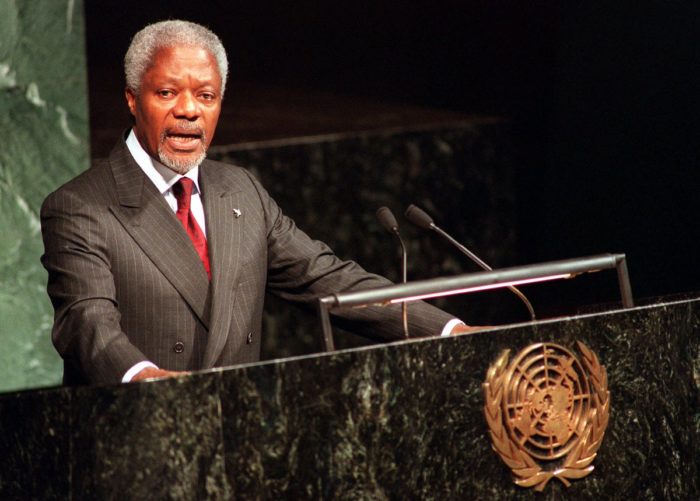 Former President Olusegun Obasanjo has eulogised the life of former United Nations Secretary-General, Late Kofi Annan as one that was lived to serve humanity and to promote peace.

Obasanjo said this in Abeokuta on Tuesday at the Session of Tribute organised by the Africa Progress Group to celebrate and pay tribute to the late world diplomat.

According to Obasanjo, Annan was popular for his advocacy for human rights, human security, inclusion, rule of law and the Millennium Development Goals, MDGs, wide-ranging diplomatic operations.

Obasanjo said Annan ensured peace between Nigeria and Cameroon over the Bakassi Peninsula through peaceful execution of the ruling of the International Court of Justice.

Obasanjo said “In 1998, he helped in easing the move to democratic rule in Nigeria, ensuring peace between Nigeria and Cameroon over the Bakassi Peninsula through peaceful execution of the ruling of the International Court of Justice.

“Late Kofi Annan, was one of those amazing individuals who have graced this planet. Gentle, compassionate, Kofi Annan observed and dedicated his energy and time fully to maintaining world peace.

“Throughout his spectacular life, Kofi Annan was devoted to something greater than he was. He was committed to improving humankind through the fairness, kindness, optimism and intelligence he brought us, and through the righteousness, fairness and harmony he promoted across the world.

“Soft-spoken and courteous, Kofi, as many called him, was not only a pride to Ghana and Ghanaians, he was and still remains a pride to all the people of African descent. To the people of Ghana, we thank you for sharing Kofi Annan with us. It is tough to eulogise this unique man, to capture in words his life and times.

“It is not easy to do so for such a committed humanitarian who did not just talk about peace-building but lived his life building peace and trying to make the world more wholesome .

“I have known Kofi Annan to execute his duties with panache and grace as he addressed the most complicated international crises. One of his chief priorities was an inclusive action plan that sought to give a new lease of life to the United Nations and create an effective international system,” he said.

On his part, representative of President Akufo-Addo and Ghana’s High Commissioner to Nigeria, Rashid Bawa, described Annan as charming, cosmopolitan and a man who gave his life to “making peace around the world.”

Akufo-Addo added that the late diplomat had been vindicated by history having served humanity with humility and dignity.

On his part, son of the former UN Secretary General, Kojo eulogised his late father who according to him “believed in pan-Africanism.”

While describing youths as “most important resources” in Africa today, Kojo regretted that the younger generation lacked mentorship on the part of the older generation.

Delivering the inauguration address, the former Prime Minister of Italy, Romano Prodi admitted that Africa has made some remarkable progress economically, but there is “need to improve on manufacturing.”