Buhari to soldiers: You must eliminate Boko Haram from surface of the earth 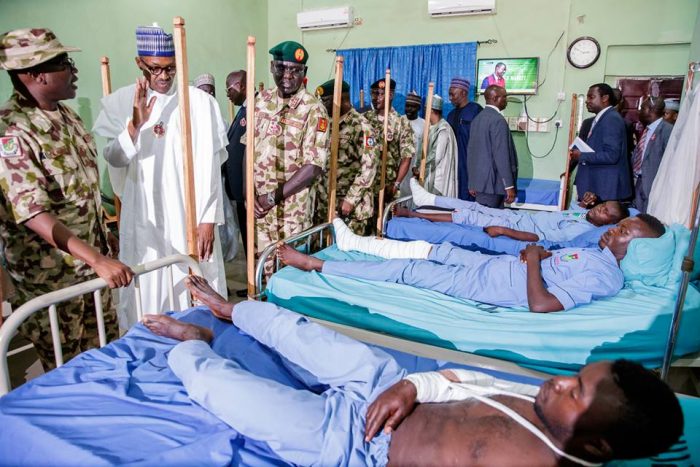 Buhari, with wounded soldiers in Maiduguri

President Muhammadu Buhari on Wednesday in Maiduguri vowed that the war against insurgency and terrorism must be won.

The president, therefore, encouraged troops on the frontline not to be distracted by challenges but remain focused and committed to the task of eliminating the terrorists from “surface of the earth’’.

Buhari spoke when he declared open the Chief of Army Conference with the theme: “Optimising the operational efficiency of the Nigerian army towards safeguarding democracy and national security in Nigeria.’’

He expressed satisfaction that the army was doing well, in spite of some setbacks in the war against insurgency and terrorism in the North East.

“We are aware that in the recent months and in recent days, there have been some operational lapses in the northern part of Borno, particularly at Jili, Arege and Metele.

“I know that you are doing your best to reverse this trend and I want to assure you that no effort will be spared in providing you the necessary support you require to complete your task.

“We remain committed to ending the crisis in the North East and making the entire area safe for all.

“I urge you to keep up the good work. I am also painfully aware that some gallant officers and soldiers have paid the supreme price in the course of this anti-terrorism operation,’’ the president said.

He noted that since 2015, when he assumed office, the security situation in the North East had improved and commended the armed forces, especially the Nigerian army for their selfless sacrifices.

The president said that the army was bringing the desired peace by the virtue of its operations all over the country.

“The effort of the military has also stabilised the security situation in the Niger Delta and other parts of the country.

“To achieve this, the security agencies must rise to the challenge in curbing threat to security in our country.

“The armed forces play critical role in safeguarding the country, hence you must all ensure that your plans and programmes meet the challenges we face,’’ added.

Buhari disclosed that he was already looking into measures to improve the salaries of members of the armed forces but urged service chiefs to work as a team to achieve desired results.

“I also want you to be aware that I am currently looking into measures to improve your entitlements and welfare, generally.

“Our commitment to entrenching purposeful and accountable leadership remains firm because it is the base from which peace, security and national development could be built up.

“I, therefore, wish to reiterate that the leaders of all strata of society, including our armed forces, must embrace the wind of change that is blowing across the country for good.

“There must be cooperation at inter-service and inter-agency levels.

“To this end, the Chief of Defence Staff and service chiefs must work closely together as one and with other security agencies, to improve on strategies that will defeat terrorism, militancy and other forms of criminal activities in our country,’’ he said.

He also charged the army as it appraised its activities in 2018, to concentrate on contemporary security challenges facing the nation, to proffer ways of surmounting them.

Earlier in an address, the Chief of Army Staff, Lt.-Gen. Tukur Buratai, said that in spite of the setback at Motele in Borno north, the army had recorded successes in Borno South and Central parts.

Buratai said he had directed a change in the counter insurgency and counter terrorism operation posture.

“I have directed for a change from a wholly defensive posture to one where we defend in numbers and conduct offensive operations in smaller packets but simultaneously in different fronts.

“I must add that no army anywhere can have enough equipment to conduct its operations.

“Henceforth, it is incumbent on all commanders and senior leaders of the Nigerian army to recognise that we are involved in asymmetric warfare which calls for dynamism and flexibility if we are to succeed with minimal casualties.

“Therefore, commanders are to ensure that they show leadership at all times and continuously adapt with changing situations, to surmount adversity in the conduct of operations,’’ he said.

The News Agency of Nigeria (NAN) reports that the conference was earlier scheduled to hold in Edo, but was relocated to Maiduguri in view of the losses suffered by troops at Motele when they were attacked by the Boko Haram terrorists.

The terrorists attacked the 157 Task Force Battalion in the town which borders neighbouring Chad on Nov. 18 and killed a number of soldiers.

Similarly, in recent past, the terrorist attacked troops at Jili and Arege villages, also bordering neighbouring countries in Borno North and killed a number of them.