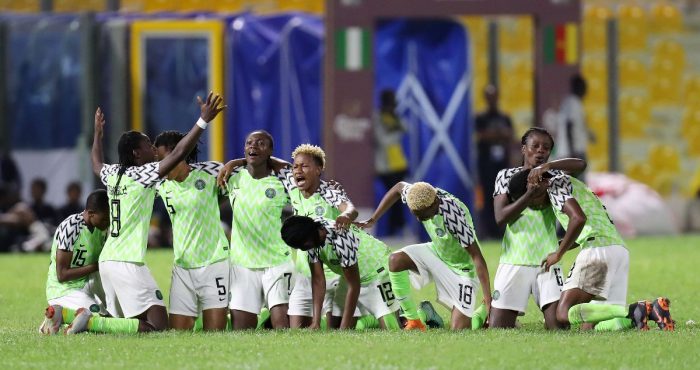 Nigeria’s President, Muhammadu Buhari has congratulated the Super Falcons of Nigeria on their victory over the Banyana Banyana of South Africa on Saturday in the final match of the 11th Africa Women Cup of Nations (AWCON), Ghana 2018.

The president, in a statement issued by his Special Adviser on Media and Publicity, Femi Adesina expressed particular delight at the discipline and commitment exhibited by the country’s senior women’s football team despite the stiff resistance of their South African counterparts.

Noting that the Super Falcons had earlier qualified to represent Nigeria at the FIFA Women World Cup tournament in France next year.

Buhari described winning the AWCON for the third consecutive time and ninth overall, as the “icing on the cake.”

Saluting the country’s female football ambassadors for doing their fatherland proud and showing clear dominance on the African continent, he urged them to approach the France 2019 competition with clear focus and determination to excel on the global stage.

Buhari also commended the team’s coaching crew, the Nigerian Football Federation (NFF), supporters’ club and all football-loving citizens for adequately preparing and supporting the players, enjoining all stakeholders not to relent in rallying round the country’s football representatives going forward.

“I have never doubted the capacity of Nigerians to excel when given the right support,” he noted, while promising the Federal Government’s commitment to sports development as a unifying force.