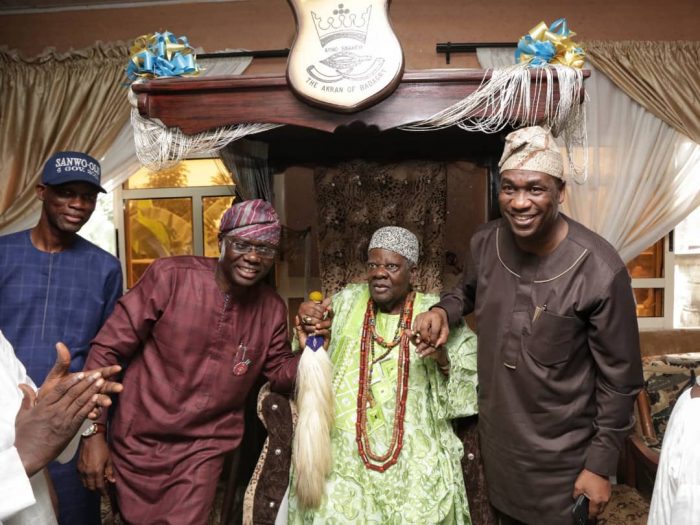 The Governorship Candidate of the All Progressives Congress (APC) in Lagos State, Mr Jide Sanwo-Olu, on Sunday said the rehabilitation of Badagry Expressway would become his administration’s topmost priority, if elected governor of the state.

Sanwo-Olu made the promise during a visit with his running mate, Dr Obafemi Hamzat, to the Badagry Divisional Leaders Forum in Lagos.

Sanwo-Olu said: “My running mate and I are ready to work and serve you better.

“We have toured this area and I want to tell you that we feel your pains, especially the inconveniences you face on the Badagry express road.

“So, we want to assure you that we will make the fixing of the all important Badagry express road one of our topmost priorities if we are elected into office.

“We would also make Badagry a tourism corridor to showcase all the historical monuments in the area.

“We would also give priority to fixing Ijagemo road, Ijeododo road, Ijegun road and other roads within this locality.

“Very soon, we would install Wi-Fi in the Lagos State University and the Adeniran Ogunsanya College of Education to aid academic activities.

“These are just little items on our development template for the state.’’

Sanwo-Olu said Badagary remained an important area of the state, adding that the area which boasts of a huge population would surely be one of the brides of his administration.

“Population is what drives election, and Badagry division has the population and majority of votes that can put us in government, therefore, the people of Badagry deserve better life,’’ he said.

Sanwo-Olu said he would run an all inclusive government, adding that he would be a governor with listening ears.

The APC governorship flag-bearer, therefore, urged the forum to ensure the party was returned to office, promising that he would take Lagos to greater height if elected as governor.

The News Agency of Nigeria (NAN) reports that on the candidate’s entourage were federal and state legislators, local government council chairmen and several other chieftains of the party.

The present Deputy Governor of Lagos State, Dr Idiat Adebule, was also in the campaign train.