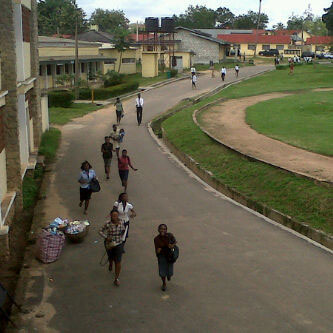 Students of Bowen University running to safety during a recent protest.

The authority of faith-based BOWEN University, Iwo, owned by the Nigerian Baptist Convention Monday shut down the school and evicted all students from the school.

It was gathered that the university authority had suspended about 40 students who allegedly tested positive to substance use.

It was learnt that their colleagues who were sympathetic to their cause protested, which turned violent. In a bid to avert the escalation of the crisis, the institution was forced to send all the students home.

According to unconfirmed reports, the crisis was as a result of the suspension of about 200 students for drug-related offences and the burning down of a boy’s hostel. However, this was said to have been debunked by the institution.

Reacting to the notice, which was circulated around 2pm, most of the students put calls through to their parents and guardians to inform them of the development while some stood outside the university premises with loads trying to find different means of transportation out of the area.

It was gathered that those who are from far destinations were given the grace of spending the night on the campus to leave the following morning.