Buhari to Swiss President: We won't rest until remaining Chibok girls are released 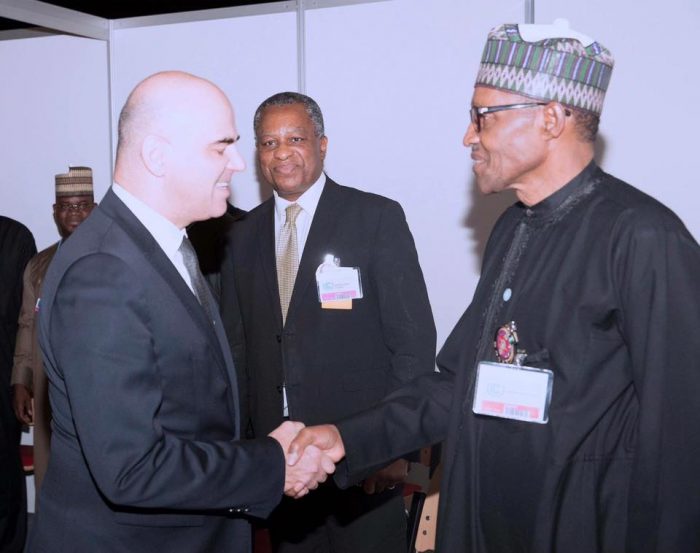 Buhari with the Swiss President

Nigeria’s President, Muhammadu Buhari has pledged that his government will not rest until the remaining Chibok girls kidnapped by Boko Haram terrorists in April 2014 are safely released.

Buhari renewed his commitment on Monday in Katowice, Poland, at a bilateral meeting with Swiss President Alain Berset, on the margins of the UN Climate Change Conference, COP24.

The President had spent the whole day at the International Conference Centre, Katowice, where he delivered his national address at the opening of the 12-day meeting of COP24, met with several world leaders and visited the impressive Nigerian pavilion at the climate summit.

During his meeting with the Swiss President, the Nigerian leader thanked the Swiss Confederation for its efforts and important role as intermediaries to secure the release of some Chibok girls and assured him that the issue of the remaining kidnapped girls and other abducted persons will remain a ”key priority” for the Nigerian government.

Buhari and his Swiss counterpart discussed joint strategies to ensure the safe return of the girls, building on the past successes of securing the release of some of the Chibok girls and other abducted persons in the North Eastern part of Nigeria.

The President also welcomed the Swiss President’s commitment to continue providing humanitarian assistance to Internally Displaced Persons (IDPs) in Nigeria and to ensure the safe release of the abducted school girls.

”We will continue to make the safe release of the remaining Chibok girls a priority and will welcome any kind of support from any quarters to make this happen, ” the President said.

In separate bilateral meetings with the President of Poland, Andrzej Duda and the Prime Minister, Mateusz Morawiecki, President Buhari commended the country for a successful outing at the opening of the COP24 meeting in Katowice.

The President told his Polish counterpart that Nigeria was facing serious climate change challenges, particularly the receding Lake Chad, which is a source of livelihood to some 40 million people living in the region.

”Nigeria is totally committed to global efforts to mitigate and adapt to effects of climate change,” President Buhari told the Polish leader, whose country is the president of COP24.

In his meeting with Prime Minister Morawiecki, the President lauded the plan by the Polish Government to open a Trade Office in Lagos soon, promising that investors who look to Nigeria can be ”guaranteed” of safe returns on their investments.

”We have a vibrant and active young population and our government is doing so much on the Nigerian economy, including diversifying to non-oil sectors.

”We welcome increased cooperation with Poland and will encourage investments in other sectors of the economy like solid minerals and information technology, ” the President said.

Morawiecki told President Buhari that traditionally 96 per cent of oil imports to Poland come from Saudi Arabia and Russia, adding ”but now we are looking at importing oil from Nigeria.”

The Prime Minister noted as the fastest growing economy in the European Union, Poland has identified Nigeria, Egypt and South Africa, as three top investment destinations in Africa.

”We want the hub of our investment destination to be in Nigeria,” the Polish Prime Minister told President Buhari, welcoming the pledge by the Nigerian leader to immediately put in place a framework to encourage more Polish investments in Nigeria.

Meanwhile, the President’s bilateral meeting with his Austrian counterpart, Alexander Van der Bellen, focused on the challenges of Lake Chad and what was required to recharge it.

Noting that the Lake faced the two challenges of technology and financing, President Buhari told the Austrian leader that enormous financial resources and technology were required to transfer water to Lake Chad from the Congo Basin.

Van der Bellen, who indicated his country’s interest to cooperate with Nigeria on recharging the Lake Chad, talked about climate change challenges in Austria including drought, glaciers melting, among others.

Buhari also met with Dutch Prime Minister Mark Rutte and both leaders followed up on their past discussions, during their last meeting in The Hague, Netherlands, in July, which centred on trade, investments and partnerships in agriculture.

The President welcomed the proposal by the Dutch Prime Minister to visit Abuja soon and promised that the Nigerian government will continue to provide a conducive business environment for existing and prospective Dutch investors.

On the sidelines of COP24, President Buhari also met with the Prime Minister of Estonia, Jüri Ratas.

The Prime Minister of the Northern European country sought Nigeria’s support on its bid for a non-permanent seat at the UN Security Council for 2020-2021.