Those fanning embers of discord in Nigeria are illiterates, ignorant - Buhari 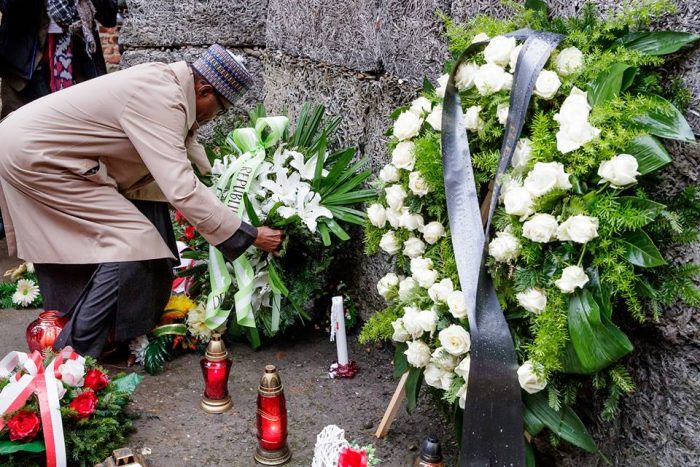 Nigeria’s President, Muhammadu Buhari on Tuesday in Poland said those fanning embers of discord in Nigeria are illiterates and ignorant.

Buhari spoke when he visited the Auschwitz-Birkenau Memorial and Museum, in Oświęcim, Poland, where he paid tribute to Holocaust victims.

A statement issued by Garba Shehu, Senior Special Assistant on Media and Publicity to the President, Garba Shehu, said after an hour and 10 minutes guided tour of the Museum, devoted to the memory of the victims who died at both camps during World War II, Buhari penned a hand-written tribute in the visitor’s book, quoting Shakespeare’s ”Julius Caesar”.

”The evil that men do lives after them; the good is oft interred with their bones”.

The President also laid a wreath at Block 11 of the museum, known as the ‘‘Death block.’’ Here, according to an epitaph in the Block: ”Male and female prisoners from all parts of the camp complex where held in this building…following brutal interrogations, they were in most cases sentenced to death by shooting.”

Shortly before leaving the Museum, which included the Nazi concentration camps Auschwitz I and Auschwitz II-Birkenau, Buhari, fielding questions from State House Correspondents traveling with him, described those fanning embers of discord in Nigeria as ”illiterates and ignorant.”

The President is on Day four of his visit to Poland, where he had attended the opening of the UN Climate Change Conference in Katowice, delivered his national address at the 12-day meeting of COP24, met with several world leaders and visited the impressive Nigerian pavilion at the climate summit.

The President had earlier attended a town-hall meeting with Nigerians in Poland, a day after his arrival in the country.