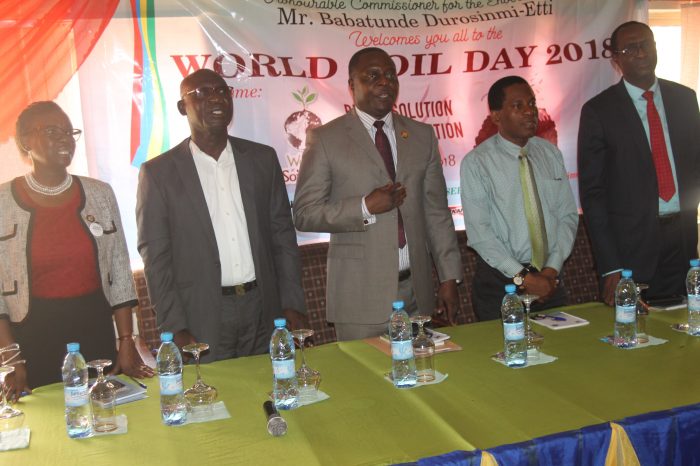 In its bid to find lasting solution to soil pollution, the Lagos State Government has urged residents of the State to halt the destruction of its soils, stressing that pollution is a major soil threat and a serious global concern.

Giving this charge on Wednesday during the commemoration of 2018 World Soil Day in Alausa, the Commissioner for the Environment, Mr. Babatunde Durosinmi-Etti urged Lagosians to be mindful of their impacts on the environment and make the protection of the environment a priority, bearing in mind increasing challenges arising from soil pollution.

Durosinmi-Etti stated that it was important to raise awareness and seek solution to the increasing challenges raised by polluting the soil, adding that that the State Government could not have found a better opportunity to do this than the World Soil Day with the theme “Be the Solution to Soil Pollution”

His words: “Interestingly, this year’s theme “BE THE SOLUTION TO SOIL POLLUTION” is, on one hand, aimed at raising awareness on the need to sustain healthy ecosystems and human well-being by addressing the increasing challenges in soil management. On the other hand, it is also intended to raise the profile of healthy soil by encouraging organizations, communities and individuals around the world to give attention to the pressing issues affecting soils”.

“As in other spheres, Lagos State has taken the lead by blazing the trail for Nigeria with the maiden celebration of this Day on 5th of December, 2016. That today marks the 3rd consecutive edition of the World Soil Day observance in Lagos State demonstrates our commitment to using global advocacy platforms to encourage friendly behavior towards the environment”, he said.

He said that communities and individuals must be watchful and give the deserved attention to sources of soil pollution such as agrochemicals, petroleum-derived products, chemicals used in or produced as byproducts of industrial activities, and wastes such as domestic, livestock and municipal wastes (including wastewater).

“These chemicals are released to the environment accidentally through oil spills or leachate from landfills. They are sometimes released intentionally as is the case with the use of fertilizers and pesticides, irrigation with untreated wastewater, or land application of sewage sludge. Soil pollution also results from mining activities, transportation, poor waste disposal, flood and erosion among other activities impacting negatively on soils”, he said.

The Environment Commissioner stated that soil pollution, which often could not be visually perceived, was a hidden danger that jeopardized valuable soil ecosystem services such as climate regulation, nutrient cycling, food production, water purification, food quality and habitat for organisms, among others.

On it impacts on humans, Commissioner Durosinmi-Etti said that soil pollution was capable of directly affecting human health through contamination from heavy metals such as arsenic, lead and cadmium, while food security would be compromised as crops produced from polluted soils become unsafe for both human and animal consumption.

To protect the soil, He urged everyone to desist from indiscriminate disposal of spent oil, uncontrolled use of agrochemicals and improper disposal of urban and industrial wastes, saying the level of adherence to this advice would determine the quality of the soil, water and many other elements critical to human existence.

The 5th of December has been designated by United Nations as the World Soil Day, following the adoption of the 68th UN General Assembly Resolution in 2013.