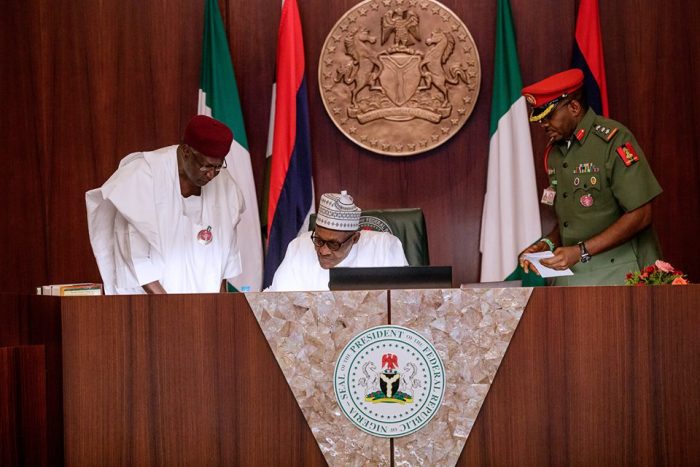 The Federal Executive Council (FEC) presided over by President Muhammadu Buhari, on Friday in Abuja approved the 2019 Executive Budget Proposals of N8.73 trillion to be presented to the National Assembly for approval.

Minister of Budget and National Planning, Sen. Udoma Udo Udoma, who briefed State House correspondents after the extraordinary FEC, said the proposals would be sent to the National Assembly.

The minister, however, did not give the budget figures, saying it was the president’s prerogative.

“They will be presented to the National Assembly; we will have to consult them in terms of the date of that presentation.

“We are hoping to be in touch with the National Assembly as soon as possible.

“They have to agree to the date they will receive the budget; we are going to be in touch with them immediately; but the budget is ready.

“If I speculate on that, I will be encroaching on the role of the National Assembly,’’ he said.

Udoma had said that the MTEF and FSP that was approved was designed to translate the strategic development objectives of the Economic Recovery and Growth Plan (ERGP) into a realistic and implementable budget framework for the medium term.

The minister had said that the MTEF projected a proposed budget of N8.73 trillion for 2019 fiscal year, adding that the figure was about N400 billion less than N9.12 trillion for 2018 budget.

NAN reports that the Minister of Budget and National Planning, Udoma Udoma, had in November announced that the federal government was considering a leaner 2019 budget of N8.6 trillion, which is leaner than the N9.1 trillion approved by lawmakers for 2018.

Addressing a consultative forum on the medium term expenditure framework (MTEF) and fiscal strategy paper (FSP) 2019-2021, the Minister said the decision was due to reduced government revenue projection for the year.