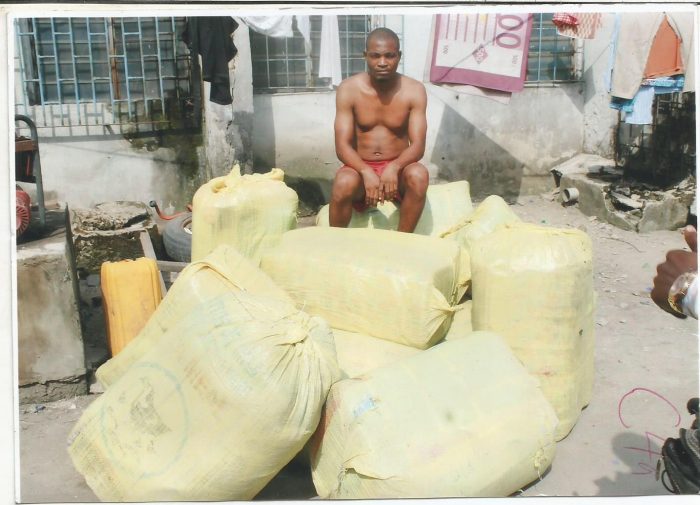 A concerned trader at Ebute Ero Market, Idumota, Lagos Island, Lagos (named withheld) has invited the operatives of the Federal Special Anti-robbery Squad, FSARS, Lagos to the market to arrest a transport agent who brought 12 bags containing clothes valued about N5.2m to him to buy for N100,000.

Trouble started for the suspect, Gabriel Onyeka from Abia State, Southeast, Nigeria when he was entrusted with the goods by one Alhaji Dabuzu at New Park in Kano State to deliver to his customer in Aba, Abia State as a transport agent.

Instead of delivering the goods to the customer in Abia State as agreed with the owner, the suspect allegedly diverted the goods to Ebute Ero Market at Idumota, Lagos to sell.

Nemesis, however, caught up with the suspect when the trader he approached to buy the goods for N500,000 offered to pay the sum of N100,000 for the goods.

In a desperate bid to dispose the goods at all cost, the suspect allegedly told the trader to pay the N100,000 for the goods and the trader suspecting the goods to be stolen, sent a tip off to the Deputy Commissioner of Police, DCP in charge of FSARS on Lagos Island, Mr Ibrahim Kaoje about the development.

Following the report, Kaoje dispatched a team led by CSP Oluseye Odunbaku to Ebute Ero Market to arrest the suspect and recover the suspected stolen goods.

The Police team stormed the Market to arrest the suspect and recover the goods and took the suspect with the items to the Station.

During investigation, according to the Police, the suspect allegedly confessed to the alleged crime that he allegedly diverted the goods to sell to enable him raise money to travel to Dubai, United Arab Emirate.

A Police source said that the suspect would be charge to court after investigation of the matter.