Johannesburg, Durban other cities run out of cemetery space 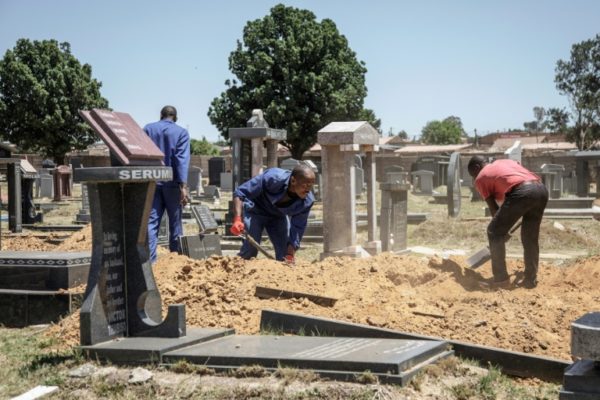 In the middle of the vast Avalon cemetery in Johannesburg’s Soweto township, two gravediggers shovelled soil out of an old grave containing remains buried years ago.

They were preparing the grave to be reused as towns across South Africa are fast running out of space to bury the dead.

Population growth, migration to urban areas and an influx of foreigners have put huge pressure on land in urban areas. Adding to the problem is a cultural resistance to the practice of cremation.

Between 45 and 60 graves are re-opened each week on average to allow for second burials in Johannesburg, the country’s largest city and economic hub.

Authorities warn that if no action is taken to change how the dead are laid to rest, urban areas will run out of room in as little as 50 years.

“Burial space is fast diminishing. This is caused by the fact that Joburg is currently experiencing high migration,” said Reggie Moloi, the city’s cemeteries and crematoria manager.

Johannesburg is not the only city in South Africa battling the shortage.

The southeastern coastal city of Durban raised the alarm more than a decade ago.

The city had an unusually high death rate in the 1980s, having been particularly hard hit by political violence and HIV/AIDS, say officials.

“We noticed that cemeteries then filled up in a shortest period of time and that quite soon … (we were) going to run out of burial space,” Thembinkosi Ngcobo, the head of parks in eThekwini, which includes Durban, told AFP.

People seeking burial space could soon be turned away, he warned. “We are facing a very serious problem.”

“The situation is dire and not readily understood… because to the eye it seems there is sufficient (space),” said Denis Ing, deputy chairman of the South African Cemeteries Association.

The public did not grasp the scale of the problem, he said.

The crisis has pushed officials to think creatively about how best to dispose of the dead.

While recycling graves has helped ease the situation, cremation still faces significant resistance from African communities, which see it as unnatural and against tradition.

At Roodepoort near Soweto, the Sipamla family buried 87-year-old mother and grandmother Caroline Sipamla in the same grave as her son.

“Graveyards are very full,” said Puleng Sipamla as undertakers covered the remains of her mother. “We thought it would be easier for us to re-open and it’s cheaper than digging a new grave.

Sipamla had made her feelings known on the matter, said her granddaughter Zoleka Sipamla, 23. “She was pretty clear — no cremation.”

Reverend Harold Ginya of the Church of the Nazarene encourages his worshippers to reuse graves — but discourages cremation.

“We are promoting this kind of thing. No one will complain that you are on top of me,” he said.

While many older people are opposed to cremation, the younger generation may prove more open.

“It would be helpful if people understood why people need to be cremated — because there is a problem of land,” said Zoleka Sipamla, a law student.

But the limited appeal of the crematorium has a lot to do with what some people associate with it: the fires of hell.

“They say,’Why would I send my loved one to hell?’” said Moloi.

Others opposed to cremation believe a bodily form is required to reach the afterlife — not ashes.

Few black Africans are cremated in Durban, with just one a week on average compared to dozens of burials.

During a recent campaign to raise awareness of the crisis, it became clear that some traditionalists in the port city were even sceptical of shared graves, said Ngcobo.

One elderly man told officials he had never shared a bed with his daughter-in-law. “How do you expect me to share a gravesite with her?” he asked. “That is totally unacceptable”.

The increasing land demands of the living could mean that cremation and grave recycling become mandatory, officials warn.

“There is going to come a time when the people of Johannesburg will not have a choice but to go to the crematoria or reuse a grave,” warned Moloi.

“We cannot be having land reserved for cemeteries.”

The situation could be eased by a controversial constitutional amendment proposed by the government, which would allow the forcible transfer of land to redress the inequalities of apartheid and colonialism.

“We believe that expropriation of land without compensation will assist us in addressing these challenges,” the mayor of eThekwini Zandile Gumede said earlier this year.

Until then, desperate times are calling for desperate measures, including the possible boxing and storage of remains older than 30 years in the corner of existing graves.