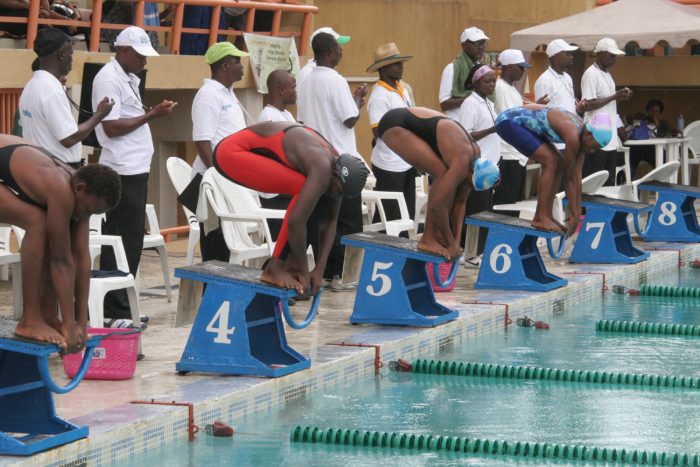 Swimming game during a tournament.

The News Agency of Nigeria (NAN) reports that Delta dominated the swimming events to leave the other states gaping at the ongoing fiesta.

In 400m individual medley women, Akiayefa Timipamere from Delta returned with a time 05:56.80 to take first position and claim the gold medal.

In the second event, the 200m individual medley men, Nmor Ifeakachukwu of Delta returned with a time of 02:22.98 for the gold medal.

In 50m breaststroke women, Iyadi Chinelo of Delta clinched the third gold medal for the state with a time of 35:43.

Racheal Tonjor from Rivers had 35:80 for the silver medal, while Doumtmi Okoko from Bayaelsa returned 37:27 for bronze.

Also, Nmor Ifeakachukwu from Delta with a time 26:54 won for the state a silver medal, while Confident Isobo from Rivers took the bronze with 27:33.

Ifezebe Gagbe of Bayelsa returned in a time of 02:57.8 to win silver and Febisola Adamolekun of Oyo took the bronze with 03:04.58.

In the 1500m freestyle women, Deborah Okpochini of Delta returned 21:05.10 for the state’s sixth gold medal.

Team Edo with 09:05.72 took the bronze and Team Bayelsa took the fourth position.