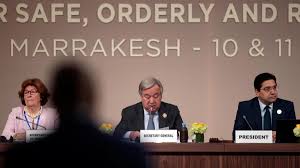 A total of 164 UN member-countries attending the two-day Intergovernmental Conference on Migration on Monday in Marrakech, Morocco, unanimously adopted the Global Compact for Migration (GCM).

News Agency of Nigeria (NAN) reports that 18 Heads of States and Governments, 81 ministers as well as civil societies, public and private sector representatives, among others are participating in the conference.

There was no dissenting voice when Moroccan Foreign Affairs Minister Nasser Bourita, President of the conference, put forward the question for the adoption of the document.

UN Secretary-General Antonio Guterres and the 72nd and 73rd UN General Assembly President Maria Fernanda Espinosa of Ecuador, in their speeches, explained the reasons and processes leading to the negotiation of the compact by the UN-member states.

So also did German Chancellor Angel Merkel and the Prime Ministers of Belgium, Portugal, Demark, Kingdom of Eswatini, Hellenic Republic and Secretary of state of the Holy Sea.

Most speakers noted that the Compact was timely, coming on the day of the 70th anniversary of the Universal Declaration of Human Rights.

They stressed the need to guarantee the human rights of migrants and create conditions for countries of origin, transit and destination to better cooperate.

Later at a news briefing, the UN secretary-general said that the unanimous adoption of the Global Compact was an emotional moment for him, having been directly involved with migration issues in his official functions back in the years as a civil society volunteer.

He said that with better international cooperation, it would be possible to invest much more in countries of origin and create conditions for people to have an option to stay in their own country and build their lives.

“I do believe that better international cooperation will also open the way for more opportunities for legal migration, taking into account the needs of markets, demography and the situation of different countries in the world.

“ I believe that this Compact will also help substantially in creating the conditions for a more balance development in countries of origin, avoiding the forced migration,’’ he said.

He said that the document, as adopted by the conference, would be sent to the General Assembly for endorsement.

As the conference continues on Tuesday, more nations are expected to make presentations on the immediate next steps leading to the implementation of the Compact.

The Compact, negotiated over a period of 18 months, is the first-ever agreement to cover all dimensions of international migration in a comprehensive manner.

The Global Compact for Migration is a non-legally binding document grounded in values of state sovereignty, responsibility-sharing, non-discrimination, and human rights.

It recognises that a cooperative approach is needed to optimize the overall benefits of migration, while addressing its risks and challenges for individuals and communities in countries of origin, transit and destination.

It comprises 23 objectives for better management of migration at local, national, regional and global levels.

The Global Compact for Migration aims to mitigate the adverse drivers and structural factors that hinder people from building and maintaining sustainable livelihoods in their countries of origin;

It intends to reduce the risks and vulnerabilities migrants face at different stages of migration by respecting, protecting and fulfilling their human rights and providing them with care and assistance.

The Compact seeks to address the legitimate concerns of states and communities, while recognising that societies are undergoing demographic, economic, social and environmental changes at different scales that may have implications for and result from migration

Furthermore it strives to create conducive conditions that enable all migrants to enrich societies through their human, economic and social capacities, and thus facilitate their contributions to sustainable development at the local, national, regional and global levels.