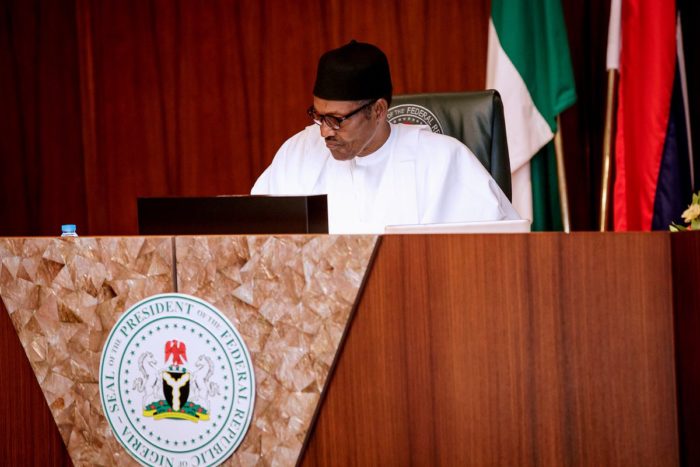 Buhari made the call in Abuja at the signing of the peace accord by the presidential candidates of all the political parties ahead of the 2019 elections under the aegis of National Peace Committee (NPC).

According to Buhari, the whole world was watching to see how Nigeria would uphold and strengthen its democracy by the conduct of the 2019 polls.

He said that the conduct of elections had been consistently marred by violence caused by the behaviour of the most sections of the political class and their supporters.

The president, however, said there were encouraging signs that the political class would embrace the responsibilities expected of it.

He said “We are here to commit ourselves as key actors in the political process, party leaders and presidential candidates to a peaceful and credible conduct of the election.

“Today, we witness the formal and official signing of the peace accord by the presidential candidates of the parties contesting the next elections.

“We the candidates pledge to accord the highest tenets of conduct and encourage our teeming supporters to do the same.

“I wish to call on the INEC and all the security agencies to put the nation first in their conduct; the world is watching us and the task of building our country, institutionalising trust in our political system and institutions is fundamental to the growth and development of our country.’’

He said the essence of the gathering was to perform a very important part of the quest for a peaceful political process and to instill trust to various contestants.

According to him, given the central role good governance plays in the nation-state, no society can develop without trust.

He said without the trust of the citizens on their government, there could not be a peaceful and progressive society.

“To gather this trust, there must be norms, rules those whose role is to offer guidance; some of them might cultural, moral or religious.

“However, for our society to function well, culture of rules and regulations must be enshrined and accepted by both the government and the people.

This is why there are constitutions, legislations and courts to mediate and regulate the conduct of citizens; the building of trust in our society is a collective duty and responsibility of all citizens.

“Today, our primary concern is to sign into norms, laws, guidelines that will guide the conduct of our national elections at all levels.

“It is generally acceptable that democracy is the best form of government for any society; it is nonetheless, not a perfect system. In spite of its imperfections, democracy has come to stay in the world.’’

The president reminded that since 1999, Nigerians had enjoyed almost 20years of interrupted democracy.

He said that since the collapse of the Berlin Wall in 1989, democracy had spread to all over the world, including most unlikely places.

He said that with all its shortcoming, democracy was still the best form of government for most developing nations.

He explained that elections were a large part of the process of democracy; methods of choosing leaders had become the most difficult for the people to manage for many reasons.

“We have not had a long tradition of democracy and so many changes in the system have made it difficult for us to imbibe the principles of democracy such as tolerance, sacrifice and commitment to processes,’’ he said.

He thanked NPC under the leadership of former Head of State, Retired Gen. Abdulsalami Abubakar for the sacrifices and good work it had done for the peace and progress of Nigeria.

Abubakar, in his address, said the signing of the accord was crucial to ensuring peace during the campaigns and elections.

He told candidates that election would not hold unless there was peace and harmony in the country.

Delivering the keynote address, former Head of State Retired General Yakubu Gowon said that the number of political parties in Nigeria had grown to 91, adding that it was healthy for the country’s democracy.

Gowon said democracy could only thrive through persuasion and not by the use of force.

Presidential candidates of 76 political parties signed the accord while the candidate of Peoples Democratic Party (PDP) Atiku Abubakar was absent.