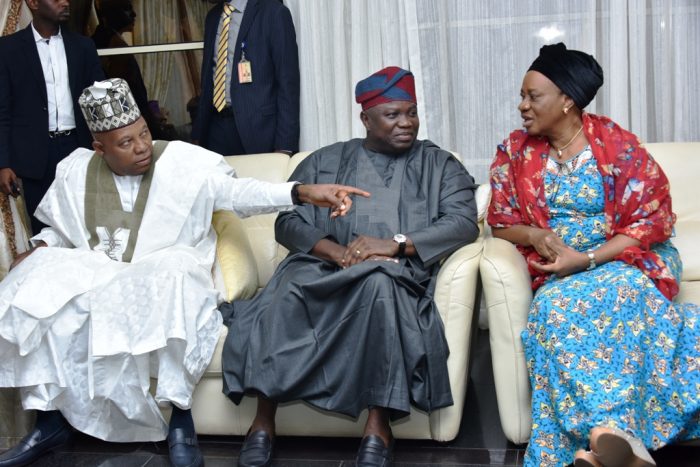 Lagos State Governor, Akinwunmi Ambode and his counterpart in Borno State, Alhaji Kashim Shettima on Tuesday met with aggrieved members of the All Progressives Congress (APC) in the Southwest over outcome of the primaries of the party to elect candidates for the 2019 general elections.

The two governors, who are members of the National Peace and Reconciliation Committee set up by the APC to pacify aggrieved party members, specifically met with party bigwigs, including former Deputy Governor of Osun State, Senator Iyiola Omisore; Senior Advocate of Nigeria (SAN), Chief Adeniyi Akintola, among others.

Shettima, who chaired the meeting, held at the Government House in Oyo, Ibadan described Ambode as the politician of the year for displaying uncommon courage and spirit after the party’s primaries in Lagos, saying that his display of sportsmanship would forever remain a reference point for others to learn and emulate.

He said, “Governor Ambode is my own politician of the year and the ultimate peacemaker. We are here essentially to build bridges of understanding, to reconcile with our aggrieved members and seeks ways to make appropriate recommendation to the NWC of the party for us to make progress as a family and to make amends where necessary.

“We have a lot to learn from Governor Ambode, he demonstrated courage, he demonstrated an unparalleled generosity of spirit that has never been shown by any Nigerian politician. Many people were spoiling for a fight. I believe that power is from God and believe me, the kind of respect that his actions have generated for him across the nation is much more than spending 18 years in power.”

Speaking to journalists shortly after the closed door meeting, Shettima said the Committee would forward its observations and solutions to the National Working Committee (NWC) of the party for appropriate action, while urging aggrieved aspirants to exercise patience as the party will do everything possible to address their grievances.

“We have finished our assignment here in Oyo, Ekiti and Osun States. We listened to our members and we have noted down their grievances and most importantly the solutions proffered and we are going to forward those observations and solutions to the National Working Committee of the party for appropriate action and we implore them to exercise patience, to show courage and to emulate my very good brother, Governor Ambode, who is a study in tolerance, accommodation and courage.

“But definitely, the NWC will take far reaching decisions to ensure that we have come on board to achieve our dream of winning the 2019 elections. Everyone is important in this movement and we are not going to underrate anyone,” the Borno governor said.

Also speaking, Ambode said though it might be tough to permanently heal the wound aggrieved aspirants might be nursing as a result of the fallout of the primaries, but that it was important for all to move on and truly unite for the party’s victory at all levels come 2019.

According to him, “There is no amount of wound that can manifest in your hearts as being present here that we can permanently heal. The most important is that we have created a platform for us to be able to start to bond our family – the APC family together.

“We were once one family but yes people who are seated here have one or two reasons to complain but we are peacemakers. What is important is that we must bond together and also carry that crusade of making our party to win the 2019 elections.”

He said when there is life, there is hope, and as such the aggrieved aspirants should understand that there could be better opportunities waiting for them at the end of the day.

“The elections coming next year will not mark the end of our party and so obviously there will be other things that can come out more fruitful than the competitions that you had actually envisaged that you are going to be the winners.

“It is in that spirit that I would just like you to imbibe whatever it is that you can emulate from my own way of responding to the situation at hand. When there is life, there is hope and there are greater opportunities ahead and it is in that same spirit that we have come here,” Ambode said.

On her part, Senator Sa’ida Sa’ad Bugaje, also a member of the Committee said Governor Ambode’s actions after the primaries had resonated beyond the State and had become a learning curve in leadership and sportsmanship for future leaders.

Other members of the Committee include the former deputy governor of Ekiti State, Professor Modupe Adelabu and the D-G of NIMASA, Dr Dakuku Peterside.