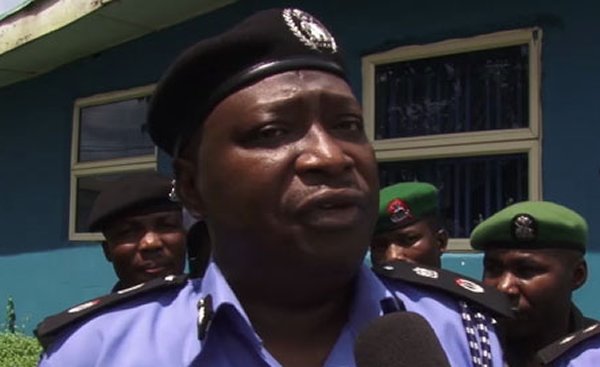 A 30-year old Tiv Community leader in Opeji Village, Odeda Local Government Area of Ogun State, Jonathan Tsekar has been arrested by the State Police Command for the murder of a policeman, Corporal Gbenga Adeboyejo over the sum of N120, 000.

Adeboyejo, who doubled as a policeman and a charcoal business partner with Tsekar,until his sudden death, was attached to the Odeda Police Division.

Tsekar, while speaking wwith newsmen, regretted killing the deceased, claiming that Adeboyejo attacked him first when the deceased hit him with plank on his back twice and that he reiterated by killing him.

The Commissioner of Police, Ahmed Illiyasu, Ogun State, while addressing journalists at the crime scene which was located in a thick forest in the area said Tsekar killed and buried the slain policeman in shallow grave in the forest.

Illiyasu said upon report by the deceased’s father, Joseph Adeboyejo who lives in Ilorin, Kwara State at the Odeda Police Station on December 1, 2018 after he stopped receiving calls from his late son, he ordered the police to swing into action.

He disclosed that after his order, the Odeda Divisional Police Officer, Baba Mohammed moved to arrest Tsekar and two other suspects whom the deceased had his last contacts with.

According to the police boss, after serious investigation and forensic analysis, the community leader was arrested.

Illiyasu revealed that Tsekar confessed to killing Adeboyejo after hitting the deceased on the head with a heavy plank of wood in order not to refund the sum of N120,000 paid to him by Adeboyejo for the charcoal business.

His words: “On 1st December 2018, Joseph Adeboyejo reported that his son visited him in Ilorin and explained a charcoal business he was doing with one leader of the Tiv community in Opeji village.

“He stated further that while the Corporal was with him, he received a call from the Tiv man informing him that his charcoal was ready, consequent upon which he left Ilorin to meet the man.

“He explained further that his son called him on phone when he reached the man’s house but since then he had not seen him nor here from him.”

“The Odeda Divisional Police Officer, Baba Mohammed swung into action on my directive and arrested this Jonathan Tsekar and two others who had earlier contacts with the deceased.

“The case was transferred to state criminal and investigation department where the suspects were put under serious investigation and forensic analysis .

“This man who was the prime suspect later confessed to killing the police corporal by hitting him on the head with a heavy plank of wood in order not to refund a sum of 120,000 paid to him for charcoal. He further confessed that he buried the deceased in a shallow grave in the farm.

He said “he complained that his goods was late and we started arguing. He struck me with wood and I also struck him with wood. I didn’t intend to kill him. When I realised he was dead, I dug a grave to bury him.”

The Commissioner of Police added “This is another effort in our crime fighting effort of which the victim is one of our own. This is not only wicked and callous but also a superlative degree of effrontery because of the status of the deceased.”

He revealed that Tsekar would be charged to court.

“The Ogun State Police Command will not allow any act of criminality to go undetected.