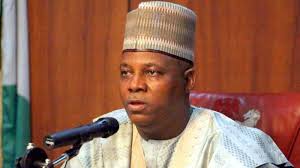 Gov. Kashim Shettima of Borno and Chairman, APC South-West Reconciliation Committee says the party will bring on board all members to achieve victory in 2019 general elections.

He said this in Ibadan when he led the committee to meet with aggrieved members of the party from Oyo and Osun states.

Among those who presented their cases to the committee were Sen. Iyiola Omisore and Chief Niyi Akintola(SAN).

“We are here, essentially, to build bridges of understanding; to reconcile with our aggrieved party members and see to it that appropriate recommendations are made to the NWC of the party.

“Our effort is to ensure progress in the party as a family and to make amend, where necessary,” he said.

Shettima urged aggrieved members to emulate Ambode, whom he said had demonstrated the generosity of spirit that had never been shown by any Nigerian politician since 1999.

“Power is the most ephemeral thing God gives to humanity, whether we like it or not. Mobutu Seseseko eventually had to leave power, Hosni Mubarak reluctantly had to relinquish power.

“So, anything that has a beginning must have an end. So, I commend Gov. Ambode.

“We have come with cleanest of intention and with very open mind to listen, obtain recommendations and proffer solution.”

Shettima said the task of the committee was also to reconcile aggrieved members of the party ahead of the 2019 general elections.

“There is no amount of wound that can manifest in your heart as being presented here that we can permanently heal.

“But we have created a platform for us to be able to start to bond our family, the APC family together.

“We are one family. But some of the people seated here have one or two issues to complain about. But we are peacemakers.

“What is important is that we must bond together and also carry that crusade of making our party to win the 2019 elections together.

“The 2019 general elections will not mark the end of our great party.”

Meanwhile, Akintola told newsmen after the presentation of his case that he would exercise patience as preached by the committee.

He, however, expressed the hope that justice would be done.

“We have presented our case and let them know that the reward system in our party is faulty. We told them that we cannot be talking of peace without justice.”

“I have been told to wait for the outcome of the reconciliation and we will wait,” he said.