This Season of Strikes 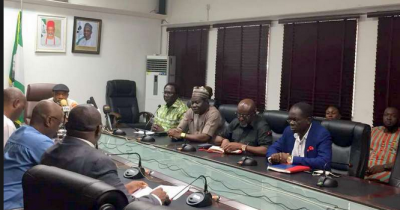 The months before general elections are always hectic for politicians, their staffers and other associated groups or individuals. However, nobody in this class bears more pressure than current political office holders, especially when there is a plan to re-contest their positions. In this respect, President Muhammadu Buhari’s administration has been in the thick of it over the past few months, coming under pressure from multiple fronts in the scramble to utilise the political leverage of impending elections.

The unions have been at the forefront of the barrage of demands that have been targeted at Aso Rock in the past few months. On the subject of unions in Nigeria, there are three major groups that periodically dominate headlines, because of their frequent use of strike action as an instrument to force dialogue and negotiation with the government. These groups are the labour and trade unions, under the general guidance of the Nigeria Labour Congress, NLC, and the Trade Union Congress, TUC; the education sector unions, with the most notable being the Academic Staff Union of Universities, ASUU; and the many unions of the oil and gas industry, with their notoriety for painfully timed strikes.

Without hinting at any political motive or calculation by these different groups, there have been demands made, with accompanying strike action and/or the threat of strike action by all of these groups in the past few weeks. On September 26, the general labour unions embarked on a short-lived strike over their demand for a new minimum wage of N50,000, an improvement on the present N18,000. It took the threat of a second strike for the government to confirm the resolution made for a minimum wage of N30,000, after negotiations with the union. Despite this, the resolution still has more hurdles to scale before it is made effective and there are no guarantees for similar action in the near future. Meanwhile, little has been said about how this will be funded.

On cue from the relative success of the labour action, ASUU has also made good on its threats and warnings by going on a nationwide strike of its own that began on November 4. ASUU’s demands are related to the implementation of government agreements on educational reform and other measures that had been canvassed since 2009. ASUU also opposes the plans for an education bank, in its belief that it is not feasible in the Nigerian system. Despite several meetings with the government, the strike continues, one month on, and the body language of the union shows that it is prepared to continue with the strike indefinitely.

Perhaps, most undesirable at this time is the proposed plan by some unions in the downstream petroleum sector to shut down their activities. Nigerians have been the victims of this kind of ill-timed action on many occasions, denting holiday plans of many through the scarcity of Premium Motor Spirit, PMS, or skyrocketing costs of transport that accompanies such scarcity. This time, Depot and Petroleum Products Marketing Association, DAPPMA, is driving the strike plans and mounting pressure on the government to make payment of subsidy arrears that oil marketers have been after for some time. Although other unions in the industry have claimed not to be in support of strike action, the potential impact on Nigerians is still cause for concern, both for the citizenry and for the government.

In discussing the timing of these actions by the different groups, it is difficult to ignore the political connotations at a time so close to elections. One imagines that the heads of these unions would have contemplated the contribution of their action to public perception of the present administration. In the same vein, the government’s representatives will be constrained to factor in the implications of non-agreement with the unions at this time, especially in respect to potential public out lash against the government. Thus, the intended or unintended shade of impending elections on these different negotiations may lead to agreements on unrealistic terms, which will come back to haunt the country.

The question really is whether these unions are being responsible in their demands and the timing of the demands. Although many of their claims and premises are reasonable in their merit, there is a need to manage expectations based on the current economic realities on ground. When labour forced the government to make a commitment to increase the minimum wage to N30,000, not a few analysts and commentators pointed out the difficulty the government would have implementing the resolution. Whereas, there is also the subject of state governments whose economic lot differ widely, and many of which are failing to meet their commitments based on the current N18,000 minimum wage.

In order to forestall a situation where government makes commitments it knows it cannot fulfil, the unions and other pressure groups that are actively working to obtain financial and other commitments from the government have to be more responsible in their negotiations and use of strike action to force the hand of government. Although global oil prices have appreciated in comparison to preceding years, government expenditure is rising just as fast, if not faster. The bloated civil service gulps in large amounts, just as the present form of what many still call oil subsidy.

Right now, there is a scramble by pressure groups like the different unions to obtain government commitment, even while the government is scrambling to fulfil multiple obligations in time for elections in 2019. The atmosphere is ripe for demands of all kinds and there may be consequences in the long run, either for this administration in its second term or for a successor who would have to deal with the agreements that the government is entering into right now. Even now, the commitments and missteps of past administrations still dog those in power now.

Unions are pressure groups, and the classic role of pressure groups is to influence government policy and decision-making, in line with current realities, needs and possibilities. They should not adopt a narrow view from the lens of their particular industry or area of focus, but are responsible for a holistic contemplation of circumstances and the development of useful and helpful solutions that helps the government to develop plans that cater for their sectional needs. Pressure groups are expected to contribute to governance, and not just to make endless demands birthed in the microcosm of their sectional needs.

If the oil marketers, for instance, can appreciate the difficulty the government faces in meeting N800 billion in subsidy debts, while trying to ensure unbroken supply, service foreign debts and meet other recurrent (and rising) expenses, then maybe they may take more measured tones in their demands and work with the government on practical solutions. During negotiations, more emphasis should be placed on sustaining any agreements in the long run. Admittedly, many of the problems that led to these demands, or the demands themselves, are long running. However, this should not lead to hasty decisions taken under the shadow of elections.

The problem in government has always been how to balance the strain of current pressing issues against the itch of past commitments. Oil prices, which are vital to our economy, crashed to very low levels a few years ago, and the country has only just climbed out of a recession. This created now-pending commitments and fresh problems that requires delicate handling in balancing vthe related issues. Where current realities present a crisis of prioritisation, it is always best to focus on the future.

This is, therefore, a call to ASUU, NLC, TUC and all the other unions currently engaged in negotiations with the government. Like has been said earlier, many of the claims and demands made appear to be well-intentioned, but significant effort at the dialogue table should be expended on avoiding further problems in the future. We want better salaries, schools and cheaper fuel, but it all begins with helping the government to make better decisions.

Tags:   This Season of Strikes