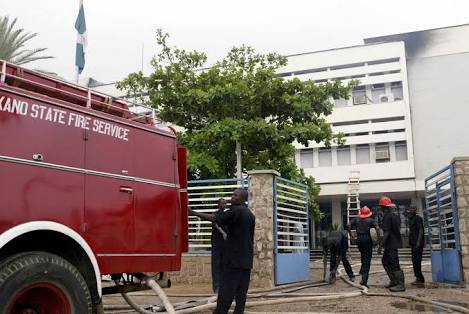 The Kano State Fire Service said on Thursday that an early morning fire razed an entire building at Unguwar Hotoro Arewa area of the Kano metropolis.

Its spokesman, Alhaji Saidu Mohammed, who confirmed the incident in Kano, in an interview, said that it happened at about 02:52 a.m. on Thursday, Dec.13.

He said the inferno affected four rooms, two parlours, three toilets and one kitchen in the residential building, adding that the cause of the fire was still being investigated.

“We received a distress call in the early hours of this morning (Thursday) from one Malam Muazu Mohammed at about 02:52 a.m. that there was a fire outbreak at a dwelling house in their area.

“Upon receiving the information, we quickly sent a fire engine to the scene at about 03:00 a.m., to bring the situation under control,’’ he said.

Mohammed, however, advised residents to be more careful, especially during the dry season and to desist from using instruments that could trigger fire in their environment.

In another development, the fire service spokesman said that one Halifa Mahmuda, 25, was reported to have drowned when he fell into an open pool of water on Thursday morning at Kofar Dan’ Agundi in the Kano metropolis.

Mohammed said that the service received a call from the Village Head, Alhaji Hamza Aminu, at about 9:03 a.m. that a body was found floating on the water.

“Upon receiving the information, we quickly dispatched our rescue team and a vehicle to the scene, at about 9:08 hrs,” he said.

According to him, the deceased was rescued unconscious and later confirmed dead and his remains were later handed to the village head.

The public relations officer also said that the cause of Mahmuda’s death was also under investigation.