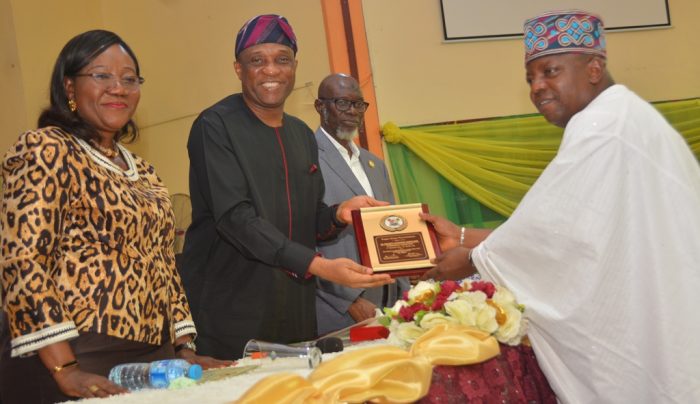 Secretary to the State Government, Tunji Bello (2nd right) presenting certificates, plaque and gifts to Onisarotu Oluwatoyin Adesina at the 2018 Pens Down Ceremony for 21 Permanent Secretaries. With them Head of service of Lagos State, Folasade Adesoye (Left) and Alhaji Waliu Onibon (Right).

The Lagos State Government on Thursday sent forth 21 Permanent Secretaries (PS) who retired from the civil service between January and November, 2018.

In an elaborate ceremony at the Adeyemi Bero Auditorium, Government Secretariat in Ikeja, Lagos, Southwest Nigeria, the 21 PS were treated with the symbolic honour of being ‘pulled out’ of service.

Speaking at the event, Lagos State Governor, Akinwunmi Ambode, while commending the retirees, said in their years of sojourn in the public service, the service had continued to evolve and adapt to changing realities and global best practice in service delivery.

“You all have been part of that process and today, you are leaving the service better than you met it. Although this occasion signifies the end of your years of active service as employees of the Lagos State Government, it also marks the beginning of another phase of service. As highly experienced technocrats, administrators and professionals in different fields of human endeavour, you will be looked upon for wise counsels and guidance on matters bothering on community development, public service delivery, among others,” he said.

Ambode, who was represented by the Secretary to the State Government, SSG, Tunji Bello, assured the retirees that the public service they were leaving behind would continue to undergo the process of transformation with the objective of seeking better ways and means of delivering timely and quality service befitting the status of Lagos State as Africa’s role model, mega city and smart city.

He said their suggestions would continue to receive due consideration in the process of policy design and implementation, while wishing them good health and many more years in enjoying the fruits of their labour.

Ambode added that the retirees were departing with their heads high and being celebrated for the excellent service they had rendered to the government and people of Lagos State.

She said apart from providing  the critical support that the state government expected of them in the area of effective policy formulation, development and implementation, they must be mindful of the burden of maintaining the leadership position of the State Public Service in the provision of quality public service.

Adesoye congratulated the retired Permanent Secretaries for services rendered to the state in the last 35 years and wished them the best in their future endeavour.