Oyetola will surely deliver; but … 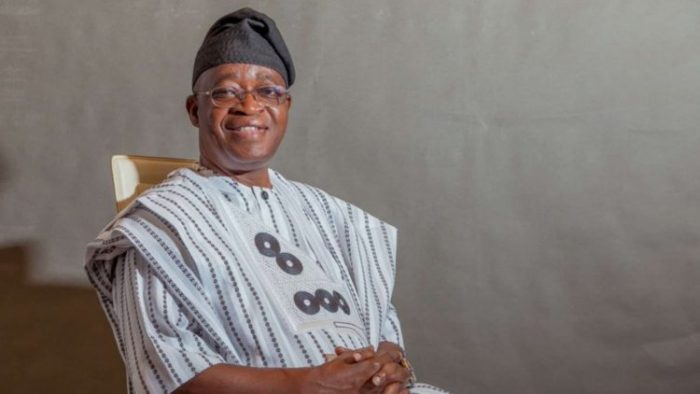 I have had the privilege of reading Gboyega Oyetola’s Inaugural Speech as Governor of Osun and I can confirm that he meant well for dear state.

In the well-crafted speech, Oyetola promised to run “a people-friendly government which focuses on growth, creation of jobs, social protection, inclusive governance and sustainable upgrade in the standard of living of our people.” He assured Osun workers of their welfare, prompt payment and prioritization of their salaries and pensions “bearing in mind the financial inflow of the state.”

A healthy state is a wealthy state! While vowing to “build on the progress already achieved by past leaders as “the defining hallmark of” his “intervention in governance”, Oyetola also promised a participatory administration that would “promote equitable and value-based developmental education that emphasizes competence and character.”

Kudos for a well-written Address which input, in no small way, did reflect the personality traits of the governor! As good instinct would have it, the governor did not parrot the speech. Rather, it was a speech that was written for; and by him.

Lots of promises and lots of expectations! But, can Oyetola deliver on these lofty aims and ideas? He surely can and will deliver; going by his educational attainments and professional background, I have no doubt in my mind that he is eminently qualified to lead the state from where it is to where it ought to be. The governor is not a novice; he can handle and deliver. Also standing in his favour is his untainted grassroots pedigree, one whose dignified mien and capacity to freely hold conversations with the people, irrespective of their political status or racial inclinations is not in doubt.

Talk about religious piety, Oyetola is an unpretentious Muslim who has managerial skills and an interpretive understanding of social relations. Though a time-tested administrator who will never suffer fools gladly, he has an amiable comportment, not a garrulous physique that has the capacity to intimidate or scare people of other, even similar, religious inclinations. Besides, he is one good manager of people who understands the politics of the Board as well as the nitty gritty of the intrigues of human management. So, he has what it takes to excel. Above all, he is a successful family man who, in all modesty, is conveniently comfortable.

However, it is a statement of fact that the technology of politics is riddled with tales: some fairy, some real; and its path is strewn with thistles and thorns: some, intentional; some, conspiratorial; others, deliberate. Facing the reality of our time, this is where the governor’s creative ingenuity comes to play. After all, in a democracy, the process bears more weight and it’s as such more valued than the outcome.

First is the issue of praise-singers whose partisan concerns are only meant to satiate the saintliness of the time and wandering heroes who embellish fake and false narratives just to draw unmerited attention and curry favour. Oyetola needs to dine with these sets of people with the proverbial long spoon for his administration to make any meaningful impact. This step will not only allow the benefits of public programs to reach their target recipients, it will also help to improve on the allied ancillary issues that have for long been threatening our communal togetherness.

Broadly speaking, this is an age when ‘mere talk’ is no longer fruitful. In line with the distinctiveness and the diversity of opinions therefore, the governor also needs to nurture a cosmopolitan worldview on volatile religious and allied issues because, whatever the governor says or does, Nigerians will surely ascribe meanings, which, if not properly handled, may put his government in precarious situations.

Oyetola needs to be proactive, independent-minded and firm, especially, on issues that are capable of catalyzing investment decisions and energizing the economy of the state. I have argued in some of my previous interventions that one major challenge of our ‘Nigerianness’ is the collapse of feedback and reward system. In my considered opinion therefore, the governor should create a Feedback Department and put certain sets of responsible government officials in charge to handle feedback. For instance, I have always wondered why a ruling party that has done so much to uplift the welfare of the people could be searching for less than 1000 votes on September 22, 2018. Of course, the more reason trailblazing programmes like ‘Ogbeni Till Daybreak’, which, on a good day, ought to have predicted the direction of the election before the party in power almost lost the plot, should be reviewed and re-energized with a view to serving the purpose for which they were originally conceptualized.

In politics, professional hawks and sycophantic hangers-on, who are always motivated by personal greed to rattle the government for attention, will always ply their trade but it is the duty of the governor to consistently demonstrate leadership by compassionate and inspiring example.

Let me state here that money, said to be the wheel of the gospel has also been identified as the root of all evil. Thus, Oyetola will be doing posterity the greatest good if he can avoid throwing money at problems. For example, a community in need of, say, ten boreholes, will get better values for their request if those boreholes are sunk – and are seen to have been sunk – unlike when huge sums of money are given to some faceless, dishonourable leaders in whose pockets such monies usually find a haven.

Last but not the least is the troubling issue of entitlement seeking. In my view, this dangerous and unprofitable razzmatazz must not find a space in Oyetola’s government. Truth be told, there are ‘AgbaOsun’ and there are ‘AgbaOsun.’ While the former refers to those “highly vulnerable seniors who lack guardian support”, the latter comprises the cult of rapacious ten per centers, the 10-for-10 kobo elite, none other than a tiny section of the electorate who prefer commercial prosperity to political liberty and latter-day democrats whose primary constituency is their pocket.

May the Lamb of God, who takes away the sin of the world, grant us peace in Osun!