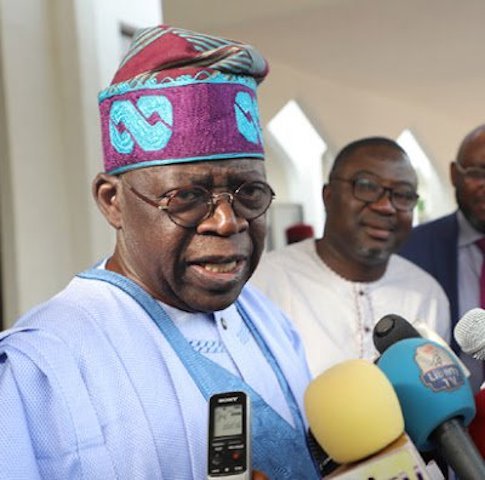 Bola Tinubu speaks on ‘plan’ to take over from Buhari

The National Leader of the ruling All Progressives Congress, Asiwaju Bola Tinubu, on Saturday in Ibadan said some unnamed political prostitutes and robbers denied Nigeria of vibrant Senate presidency since 2015 when President Muhammadu Buhari took over the reign of governance.

The PUNCH reports that Tinubu said he and indeed the APC had no regret for their preference for the Senate Leader, Ahmed Lawan from Yobe State, becoming the senate president in 2015.

He spoke at the maiden Abiola Ajimobi Roundtable organised as part of the activities marking the 69th birthday of the Oyo State Governor, Senator Abiola Ajimobi.

The former Lagos State governor said, “Senator Lawan, thank you very much. You are a great example of a very consistent and intellectually resourceful leader that we have in this country. We saw in him, these leadership traits and the qualities we wanted in the senate president. We know you are qualified and competent to be, that you would have led the most important arm of our government more effectively but the political prostitutes and their robbers and their collaborators denied you of it because of selfishness and selfish aggrandizement.”

Why commending Oyo State Governor Ajimobi, for changing the fortunes of the state in the last seven years, Tinubu said his success would have been incomplete without a worthy successor and hailed his choice in Adebayo Adelabu, whom he stressed would build on his exploits.

At the event were a former Head of State, General Yakubu Gowon; the United States Ambassador to Nigeria, Mr Stuart Symington, and wife of the governor, Mrs Florence Ajimobi.

Speaking on the theme: ‘The Imperatives of Building Institutions for Lasting Legacies’, they all affirmed that while strong individuals were necessary for visionary leadership, it was only strong institutions that could enhance proactive leadership, good governance, effectiveness of the rule of law and inclusiveness of the citizenry.