2019: Ooni begs Nigerian youths not to give up on leaders 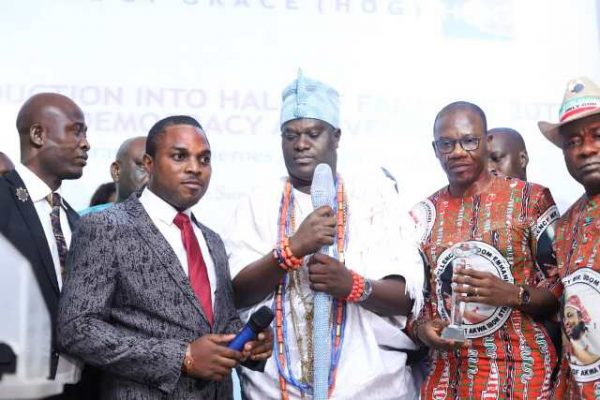 Ooni of lfe, Oba Enitan Adeyeye Ogunwusi has begged Nigerian youths not to give up on the leaders yet, insisting that there are still leaders with the love of Nigerians at heart among the present crop of politicians and state Chief Executives.

Oba Adeyeye advised that when youths look up to these exemplary leaders, they would live to become leaders like them in nearest future.

According to a release by Akwa Ibom’s Commissioner for information, Mr Charles Udoh, made available to newsmen on Monday, the Ooni made the remarks during the investiture of Udom into the Hall of Fame of the Hall of Grace (HOG) magazine whose chief custodian is former Minister of youths and sports, Chief Alex Akinyele, and managing custodian is Rupert Ojenuwa.

The Ooni conferred the honour on Udom at the Civic Centre, Victoria Island, Lagos on Sunday night.

Other distinguished Nigerians who had been recipients of HOG Hall of Fame included Alh. Aliko Dangote; former Governor of Lagos and Minister of Power, Road and Housing, Raji Fashola, and Special Adviser on Media and Publicity to President Mohammadu Buhari, Femi Adesina, among others.

Oba Adeyeye who described Udom as a dogged, tenacious Chief Executive who is also full of passion for perfoemance, also described his state, Akwa Ibom, as Nigeria’s most beautiful and cleanest state but lamented that the Federal Government has not taken advantage of the state huge tourist potentials in this respect.

Oba Adeyeye charged Nigerians, particularly the youths, to celebrate good leaders, and acknowledging the many challenges in the country, he said, there are still good leaders, who according to him, are Governor of Ogun State, Ibikunle Amosun and Udom, among others.

The Ooni thanked Ojenuwa, for great initiative that has stood the test of time and integrity. He noted that HoG under the publisher’s leadership has continued to seek out credible Nigerians like Udom, Nigerian youths to emulate him.

He, therefore, charged the youths to be up and doing at all times, just as he gave a reassuring commitment to Nigerian youths, saying: ” I live, I breathe, I walk and do everything concerning the youths of this country which endeared me towards the organizer of this great event.

”I will never get tired of my support for the youths of this country and I will always be a part of you as long as you are ready to celebrate good leaders, stressing that nobody knows tomorrow, ” You can be a maid today and still become a leader tomorrow.”

Urging the youths to pursue their dreams tenaciously to guarantee a brighter future like Udom did, he said: ”The governor of Akwa/Ibom used to be a banker, he never knew he could be this elevated” Events like this is one of the ways to encourage one another as youths are the pillars of every society like ours, helping the society grow and glow. Initiative like this gives encouragement to one another, everything is not money, the words of encouragement you give to people, could go a long way in their lives, stop criticising and blaming leaders, instead let us all join hands to make this nation great.”

He advised parents and guardians to encourage initiative s from their children and wards and seek their opinions on issues as everybody has a role to play in nation building, and charged all to embrace peace and unity.

Meanwhile, hundreds of the kinsmen of Governor Udom and top government functionaries, led by his Commissioner for Information, Mr. Udoh, graced the occasion in a show of love and solidarity to the governor.

Mr. Udoh who represented the governor thanked the Ooni for his remakes and assured that Governor Udom is taking democracy to the next level in the state and delivering glowing dividends if democracy to the people. His words: ” Governor Udom is not only giving an all-encompasing facelift in terms of infrastructure development to the entire state but also creating a conducive environment in all spheres by adding value to their lives as the day unfolds.”